Wonderful day. Hot, sunny and peaceful. We went dow to the Cafe for coffee this morning. We had an enjoyable chat with Christos who runs it. We were telling him about the Pensioners (who have a day off today and he says that Nikos from Artemon is his relation. We are not surprised. Everyone is related to another here. Pauline bought two, huge, home-grown, pork steaks from the supermarket and a cheese.

We drove back home to get on with the day’s job. The Pensioners have cleared all the vegetation and left it in bales on the land. We are going to move it down towards the gate so someone can come with a truck and remove it. We hadn’t been working more than half an hour when our neighbour, Giannis, stopped and said he would like it for his animals. We are only too pleased. He will move it over the next few days. The Pensioners work six hours or so each day. We managed four today and are staggering around with fatigue. The owl was with us and watching us intently throughout the day. Presumably, it was looking for disturbed prey.

The Pork steaks improved our mood. Pauline marinated them for three or four hours in garlic, sage, lemon and olive oil and the slow cooked them for a couple of hours. I’m tempted to say that the flavour was out of this world but that would be hyperbolically silly.

A hot one with no breeze at all. The Pensioners arrived at 7.00 am and have completely transformed the ‘veg. patch’ by 10.am. In that time, Pauline & I had been to the garden shop and bought good, strong, flowering pepper plants (the bell peppers), sweet basil and two types of tomato – plum and cherry. Having prepared the ground in harmony, the pensioners are enjoying arguing about where everything should go.

By 1.00 pm, everything was planted, the garden looked absolutely wonderful, the Pensioners were friends again and were preparing to leave. As we drove Nikolaos back to his home in the village of Artemonas, the temperature gauge hit 30C/86F. He will be back for his eighth and last day tomorrow at 7.00 am.

No rest for the wicked. Pauline is making another batch of orange and whisky marmalade this afternoon. She is beginning to get requests. I have been delegated to clean the patio.

I didn’t finish the cleaning.

A humid start to the Pensioner’s last day. We had to say Chronia Polla to Costas. He looked surprised that the English should even know about the tradition. Our vegetable patch finished and planted out, they set about clearing the section that fronts on to the road and to assess the damaged wall running up the Community Path at the side. We will have to do something about this when they’ve finished.

Leaving them working happily, we went down to collect the post for us and friends. Only an internet bill for us to pay but remarkably cheap. It was €46.00 for a month and a half. It is so lovely and fast, one hardly remembers it is only 3G. On to the garden shop for bags of soil and Geraniums (Pelargoniums). The owner and I had an argument about what they should be called. I still bought six. I will propogate cuttings from these and make thirty six for later in the season. Most will over-winter.

We filled up with petrol for only the second time in five weeks even though we have done a return journey to Artemonas for the past eight days. It came to €71.00 (£60.00) and will probably last us another five weeks. We always go to Elinoil because the people are so lovely. They want us to drop in again on Saturday so they can give us some presents from their land – fresh eggs from their hens and early vegetables. That’s the sort of people they are – the sort of lovely people we like.

Where are the Pensioners? We are lost without them. If you can adopt a pair of Grandads, we would adopt them. Still, we will invite them back next year. It is the most glorious, still, warm day. Another local farmer who we have nicknamed ‘Smiler’ over the years as he has passed our house on his motorbike , smiling and nodding, has turned up unannounced and started to bale and clear huge amounts of dried grass and material for his animals. We are very pleased.

It has been an emotional early morning. Over the past few days, we have been inundated with emails and contacts from past pupils and ex-collegues of our school. It closed to be replaced by a £26 million Academy. I seem to have that effect on schools. In the early 80s, I was Head of what looked like a Victorian prison but was actually an old Board School built in 1880 in the fashionable pagoda style.

I haven’t looked at these photos since 1982. It is hard to believe this wasn’t a prison looking in on it now. The kids certainly called it that.

Now, our last school has gone and thousands have posted memories on the web. Hundreds have been moved enough to witness the demolition. I rather wish I could have been there.

It is really quite moving to think of all those lives, those connections that are no longer made. I’m almost forgetting my life-long motto: Move On!

Everything is moving on particularly in the gale force winds that arrived in the night. Last evening, Apostolis tooted and waved wildly as he came down on his bike from his farm up the road. ‘Smiler’ came to bale some more cuttings for his animals and left with his dog on the back. This morning his bales have been blown to the lower level as the destructive winds took hold. We drove down to pick up the post and got the car sand-blasted near the beach. We may be outside less today.

My lovely sister, Ruth, can no longer sing the Beatles classic, When I’m 64 because she is. Happy Birthday, Ruthie!

What a blustery day – Octo Beaufort, as the weatherman calls it or 8 on the Beaufort Scale. We have spent most of it indoors after driving up to Apollonia to collect a delivery. It turns out to be three, free, replacement doors for our kitchen cupboards courtesy of IKEA UK. What a wonderful act on their part. I emailed the IKEA girl who searched the doors out from their European Store and despatched them to the Sifnos Post Office free of charge. I have also contacted the CEO of IKEA UK to thank her for the generosity of the act. 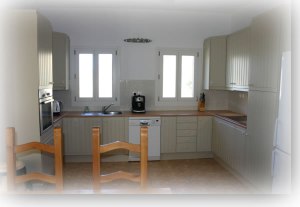 While we were out, we called at Mario’s Supermarket. Flora gave Pauline some punnets of strawberries free. They were just starting to go a little too soft. Within a couple of hours at home, Pauline had turned them into the most wonderful strawberry compôte to be eaten with yoghurt. Flora will get a jar tomorrow.

An incredibly windy night. Our gate was blocked with cut grass and branch prunings this morning. We will have to tidy the road up outside as well. It will be a general clear-up day today.

We were sorry to hear that the nice little Mrs. Simos died yesterday. Her funeral was undertaken in gale force winds. Life and Death can be very cruel.

It has been a wonderful week. It started off with glorious weather, had a blip of a couple of days of strong wind and is finishing off as it started. This morning has opened beautifully. We have drunk our fresh orange juice and Yorkshire Tea and reflected on how lucky we are.  A week today will be the first day of June and we will start swimming. Got an email from a friend in Lancashire who said they had just experienced a massive hail storm and then a phone call to Surrey confirmed that they had seen a bit of that as well. The Swiss Alps have had a huge fall of snow over night and the whole of our journey route down to Greece will be shrouded in rain this weekend. How lucky are we?

We went up to Apollonia to do our shopping and then called in to see the lovely family at the Elinoil garage and were rewarded with a large basket of fresh eggs and three, big cheeses made by the family.

My Cosmote Mobile Internet contract provides for 10Gb of down/upload. That is huge and should be enough for anyone. This month – with six days to go – I have used 8.5 Gb already so I will have to be a bit more sparing for the rest of next week. I have been listening to wall-wall Radio 4 and researching material on-line too much this month. We have also been using it as our English phone via Skype.