Where is May going? It feels like we only just arrived and yet we have been here for five weeks and away from Surrey for six. That is the crucial thing for tax purposes. We are only allowed to be out of UK for 180 days per year. This means, we have to be back in Surrey for Friday, October 11th. This will mean leaving Sifnos somewhere around October 4th this year. We have an open ticket with Superfast so we can plan ahead.

Went out early into a wonderful morning taking the rubbish to the bin store and then on to the Cafe for coffee annd a chat with Christos. We talked about his Uncle Nikolaos who did our garden and about his Aunt who makes jam. We will go up to see her next week. The Economist magazine in Britain has a distinctly optimistic article about the turning Greek economy this week. This article says:

This summer should see a record 17m tourists crowding Greek beaches. Bookings from Germany and Russia are soaring, say travel agents. A projected rise of €1.5 billion-2 billion in tourist revenues will give the budget a boost.

I quoted it to Christos but he is extremely pessimistic and says the ferry situation will mean that these tourists will never make it to Sifnos. I told him that I had read of a plan for the Wester Cycladic islands to access European money to finance their own ferry build and deployment. Once again he was pessimistic. This is Greece, you know, he said. It will never happen.

I’ve got to stop writing this but it is THE MOST WONDERFUL DAY. Where else could one want to be on a day like to day but in Sifnos countryside? We worked hard today raking up all the final rubbish that the gardeners grubbbed up last week. Someone will appear with a lorry to take it all away in the next few days. The local farmers have had their fill.

Working outside is a joy. It is so far removed from what we both did in our professional life that it doesn’t feel like working at all. When we first bought this land in 2000, it only had an unmade track running by. It was one of our concerns in the purchase. We returned the next summer to find a metalled road instead of a dusty track. The surfacing only went just past our house (as if it was just for us) but now goes right across the island. What that means is that quite a bit more traffic drives up and down the mountain each day. Every day, the lovely Kiki drives up taking her shepherd husband to his farm. She toots and waves enthusiastically. Giannis and,  even his father wave numerous times a day as they drive  up and down. Apostolis and his son, Nikos toot and wave as they trundle past with lorry loads of hay or freewheel down on their bikes to save petrol. ‘Smiler’ waves five times a day particularly as he rides down in the evening with his dog on the back. Water carriers, dustbin lorries, soil lorries, taxi drivers – all the Sifnos world goes past our house and acknowledges two mad English people out in the midday sun, working in their garden.

In Surrey where we have lived for two years, apart from family, we know two people on speaking terms. It is a different world.

My Best Man sent me a photo of how I used to look forty years ago. Actually, it flatters me but that’s why he is my best man. 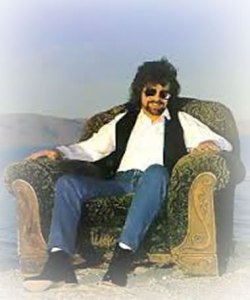 If you think I look similar to Jeff Lynne of ELO, you could be right.

The Post Office and Parcelforce are about to be privatised in Britain. We’ve been using the latter extensively to move ‘stuff’ to Greece for years. It is remarkably economical way to do it compared to with alternative carriers. As we drive to Greece, our 4×4 is stuffed to the roof with ‘stuff’ including wine and cheese bought en route in France and Italy. There are bulky but light things – for example, six month’s supply of Italia ESE coffee pods that go in boxes to be posted. In all, we post about 80 – 90 Kgs of ‘stuff’ a couple of days before we set off and they are usually in our small, island post office by the time we arrive. This year we sent four boxes but only three arrived. It turned out that two, small bottles of after shave were accidently packed but are prohibited. For that reason, the parcel was returned to our home in Surrey after being scanned.

The full consignment of four boxes was charged at £190.00. The fourth box was picked up by Pauline’s sister who removed the offending bottles and reposted the box. We heard this morning that Parcelforce have returned the sum of £155.00 in compensation for our trouble even though it was of our own making. After costs, one wonders how much profit Parcelforce made on that procedure. Certainly, their customers are happy here. Surely privatisation will change this!

Went out to collect the post at 9.00 am and returned without mail but with a huge cheese and a dozen farm-fresh eggs in a basket courtesy of the lovely Kiki. Later, after finishing off a little work, we went out for a late lunch at 3.00 pm. Kalamari and salad was delightful down by the lapping waves and the darting fish. A lovely conversation with our amanuensis about footpaths and things finished off the afternoon. We drove back up to the house to coffee and a short snooze. Bliss.

Don’t want you to get too excited but I am having my haircut this morning out on the patio. There is quite a strong breeze so I probably won’t have to sweep up afterwards. Half my head will be floating across the valley by the afternoon. The weather forecaster is predicting new clouds of Saharan dust falling over the next few days. If my hair arrives first, it could prove puzzling to local farmers.

Discussions with the Notary about our house sale this morning. I always find that unsettling. Here we are, sailing blissfully along and reality keeps trying to intrude. Never mind. All will be as it will be!

Glorious morning. Kamares is sleepy and quiet. Kiki drove her husband up the mountain to his farm in the third different car this week. Still waving and tooting. Got a second viewing of the house this morning. I’m enjoying so much, I’m inclined not to sell it although I know I will if the acceptable opportunity arises.

Simon Baddeley has returned from his Greek home on Democracy Street in Corfu to his English home in Handsworth, Birmingham. He contrasts the experience in two, simple photographs. 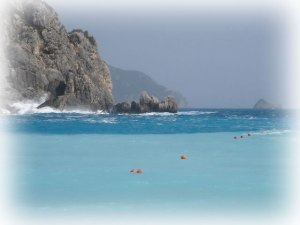 These photos are snatched from his interesting Blog, Democracy Street, illustrating the blue seas on the West Coast of Corfu as he left and the cold, wet walk around Handsworth, Birmingham as he walked the dog. Where would you rather be?

It has turned out to be one of the best days we have ever spent on Sifnos. Two wonderful pieces of news came our way this morning which have lifted us and could change our lives. Tantalisingly, I can reveal neither of them to you today but I will in the fullness of time. So good was the news that we went out for lunch at Captain Andreas Fish Restaurant.

Salad and platefuls of small, fried fish with a glass or two of cold, white wine completed the day.

Early out this morning. Meeting with Notary in the Prego Coffee Shop in Apollonia. If you’re going to have a meeting, there is no better place. Lots of interesting matters raised.

We went on to the Accountants. It was lovely. The girls (women) there are so friendly and good fun. It is not often one visits an accountant’s office for a good laugh but we did. This year, our visit was quick, easy and cheap compared with the frenzy of last year. This was followed with a strangely delightful and productive discussion by phone with the architect. Back home, I read up the Agenda & minutes of the Sifnos Council Meeting from earlier in the week. Thank goodness for Google Translate. 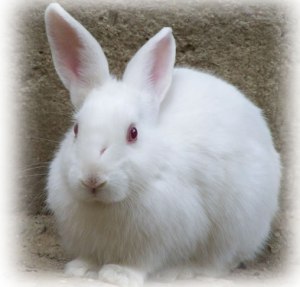 An especially Happy June to you all.

We have a lorry coming tomorrow to take all our garden rubbish away plus ‘stuff’ that has cluttered the back of the garage for years. The cane mat topping that was replaced three years ago with a solid, waterproof roof can now be got rid of along with old, outdoor chairs that are falling apart, etc., you get the idea. The grounds will breathe a sigh of relief when it all goes.

Rain is forecast for today and, perhaps, overnight. It looks like it will be too light to make much difference to the garden. It is lovely to see even a prospect of rain in June. As we drove up to the supermarket in Exambella this morning, one or two drops fell on the windscreen. I stopped and took this photo en route. The clouds are promising but not much.

Spent the afternoon staking the tomatoes and peppers. We hope it will be enough support against the inevitable winds. I have been told to get some sulphur to dust the leaves with. That is a job for Monday. I’ve grown about twenty mixed pepper plants. The gardeners (Pensioners) put some in for me. I have been left to do the rest. Everything is growing so quickly. I’m quite astonished.