Last night, the road outside our house was like a motorway for a couple of hours as all the world drove through the darkness up to the monastery – Agios Simeon. Cars, taxis, bikes – they all roared up the mountain and, soon afterwards, roared back down. We are thinking of turning it into a toll road – a small fee of, perhaps, €10.00 each way would suffice and make us a bit of pocket money.

Spent the entire day preparing a legal submission. I am absolutely exhausted. Must be a sign of age. This depth of research, analysis and argument presentation I could usually knock up between meetings. I’m just completely out of practice. I’m told it has been a lovely day. I’ve seen none of it.

Booked a couple of days in Syros soon to speak to officials in Ermoupolis. Also, must go up to the Community Office this week.

Going up to Apollonia after the Post this morning. Spoke to our amanuensis for advice. Will speak on the phone later. Called in at Germanos to enquire about our OTE TV bill. We haven’t had one yet. When we speak to them, we are told our first few months are free on special introductory offer. Our mobile internet is still free also. We just can’t get them to take our money.

Just one of those magic days. September is delightful. The temperature has reached 29C/85F but it was a cool night and a delightfully cool start to the day.

The vegetable patch has been running out of steam for a week now and, although I could feed it to keep it going, we only have four and a half week left so I decided to give up on it. Today we cleared the vegetable garden with the exception of the Rocket plants which are going strong and should get through the winter. I then dug it and limed it in readiness for the winter rains. Let’s hope they come.

Later, we had a lovely, long swim although the water wasn’t as warm as we would have liked. We felt better for having put in the effort. We ate roast pork for Dinner outside. The temperature was decidedly cool. It isn’t hard to believe it’s September and we’ll soon be in long sleeves.

Another wonderful day. The temperature was just 23C/73F when we left the house at 8.00 am and, although it did climb to 29C/85F by mid-afternoon, it never really felt terribly hot. There was always a slight, Autumn-ish edge on the breeze. In spite of this, we did some more garden clearing and then went down for a lovely, long swim. Went to Captain Andreas tavern for a late lunch – very simple but delicious. We had a huge Greek Salad to start and followed that with large platefuls of small silver fishes dusted in flour and then deep fried with garlic sauce and a gallon of crisp white wine plus a bottle of water. A sign of the times – the whole lot came to €29.00 or less than £25.00.

Each year at this time, Sifnos hosts a three-day festival of traditional Greek cooking. The festival is entitled Nikolaos Tselementes, who was the most famous Greek cook from Sifnos and was the first who wrote a Greek recipe book, describing the entire traditional Greek kitchen.

Representatives of 10 Cycladic islands have stalls to advertise their wares and there is music and socialising.

We usually go on one of the evenings but this year, especially, we went to support our friend and amanuensis who had a stall there. We met lots of friends. We saw Sophia who retired from the restaurant business last year. She was looking very brown and relaxed. She said she now had time for sun bathing. We met Apostelos, our neighbour, carrying a huge bag of cheeses which we know he loves. We met our butcher without blood on his hands for once and we met Dinos who fitted our OTE TV box. All lovely people who it is a delight to talk to.

The one person who we had hoped to meet because we need to speak to him was the Mayor. We know him well and have done since he was a shy teenager but he is now very much man about town doing an important job. We didn’t see him there. We will probably have to make an appointment.

The glorious days keep coming. Little breeze, a pleasant temperature of 26C/79F after a night time temperature of 22C/70F. Last year at the Food Festival where we were last night we remember being uncomfortably sweaty. Not last night. It was perfect.

Catching up with British and American correspondence this morning. later, I am contracted by my wife to clean the patio. Those pesky grasshoppers keep messing up all round the plants.

Another lovely day as we have just four weeks left in our house for this year. We have reached 31C/88F at mid-afternoon.

Our bedside alarm goes off at 6.30 am come rain or shine. Pauline leaps out of bed as if she’s been shot at 7.00 am on the dot where ever we are. Now, we also have a natural alarm clock. Right outside our bedroom patio doors we have a Bottlebrush bush or Callistemon to give it its correct name. Ours is flowering again and providing September food for clouds of small bees. I woke at five this morning to the loud and distinctive hum of the swarm as they fed outside our bedroom. 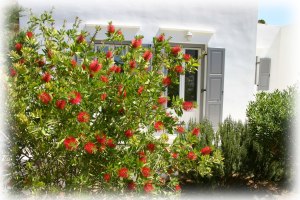 I’ve been pruning bushes and watering while Pauline’s been cleaning bathrooms. Going swimming to relax after the One o’clock News on BBC Radio 4. ….Been swimming. It was delightful. Hardly anyone on the beach or in the sea. And this is a Saturday. It means the Season is over. Kids go back to school on Wednesday. Go kids!

Talking about crickets, which we were doing yesterday, there is a report in The Times of a chap who loved the sound of crickets in the Mediterranean buying a thousand over the internet and releasing them in his English garden. Not only will they almost certainly die during the winter but he is being severely censured for running the risk of importing diseases to the UK.