Another glorious Sunday. We have spent the day ;at home on this quiet, golfing development just metres from the sea. The sun has been particularly strong and the temperature reached 25C/77F with no breeze. We have done what we would do at our UK home – sitting on the patio discussing World events. In recent years, we have been amongst other hotel gusts and it is nice to be private and to enjoy the sun and the pool without compromise. This is definitely the way for us in the future.

We leave for Gatwick at the weekend and will do a quick dash to France a few days later to do some shopping before Christmas. I don’t know why I mention that because we couldn’t care less about Christmas other than many places seem to close up. Our discussions today have virtually crystallised our intention to drive down to Girona just over the French/Spanish border for the month of July with a couple of nights in Bordeaux en route. The whole trip will encompass at least five weeks with a couple of hotels plus one in Bordeaux either way.  September in Greece and November in the Canaries plus a couple of city breaks should get us through 2019.

Our last week of this month away. The pool cleaner arrived late and so we had our first swim of the day late which meant we wouldn’t have time to go out walking and be back in time for Daily Politics (now Politics Live). We just lay out in the sunshine around the pool. We were doing fairly mundane things. Pauline had received our car insurance renewal demand. It was £50.00/€57.00 more than last year. Exactly as last year, she went to our current company’s website and applied as a new customer and saved £50.00/€57.00. It looks as if we will just cancel our existing contract and start a new one as we did last year.

While we were watching Politics Live, we heard that Theresa May was addressing the House of Commons at 3.30 pm. We decided to clear our diaries and watch. In the whole of the Commons, she received support from three MPs and one was ours – Nick Herbert, MP for Arundel & South Downs. We will need to make sure he is toast at the next election. Our constituency was hugely Remain. The Commons is massively opposed to May’s deal but for opposing reasons. The only solution looks like General Election (Tory turkeys voting for Christmas) or a People’s Vote which would be difficult to square with the poor of the North and East.

I still think this latter choice is the least worse choice which is why I’ve spent so much time canvassing for it. All will come clearer very soon. The worst that can happen is that we leave the EU to placate millions of dispossessed who had and, largely still have, any real idea of the consequences of their decision.

One of those typical, Canarian mornings that opened with sunrise behind a huge bank of ominous cloud. Breakfast, download of newspapers, prepare for first swim and the sky is blue, the sun is up. There is not a single cloud in sight. We started the first part of our 27th hour of swimming in 27 days. Completed second half this afternoon. Just three days and three hours left before return to Sussex.

After a swim and coffee, we set off on an hour long walk to a small settlement called San Blas on the coast of south eastern Tenerife. It is essentially residential with an emphasis on holiday rental accompanied by the services that the tourist demographic require.

It sounds ‘snooty’ but the emphasis is on English services for English people who cannot or are not prepared to interface with Spanish/Canarian society. Guinness Pubs, Aberdeen Steak Houses, etc. are the very stuff of Canarian’s supply to this Anglophile demand. The sign below is typical of the Canaries: 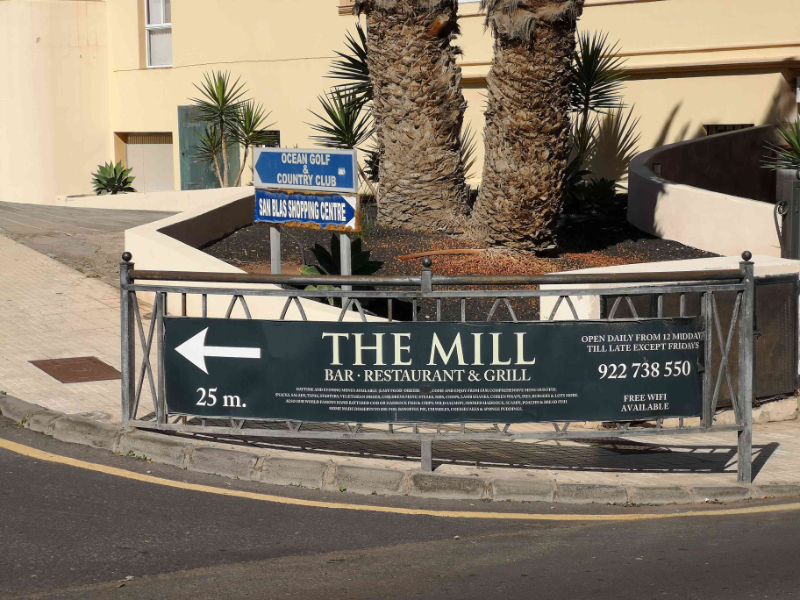 There is no effort to be made in San Blas. Just follow the signs and you can access England in the sun.

We walked back in time for Politics Live and the Brexit debate. Another swim in the sunshine and then relaxation. It is funny but, after an hour’s rest in the sun, I was feeling lazy and in need of exercise. I seem to have reset my body clock and may have to live on a permanent treadmill. Worth considering.

A momentous day. Up early and sunshine from dawn to dusk. Early swim, long, 2hr walk followed by second swim. We have now done 28 hrs of swimming and 50 hrs of walking. The photo below was taken a few days ago from the top of our road. I can’t believe that is snow on top of the mountain but it might be.

After 2 x half hour swimming + 2hrs walking, we felt we could settle down to sunbathing and politics in equal measure. Not only did BofE analysis tell us that we will all be poorer under any scenario of Brexit other than Remain but, as I predicted almost two years ago, Labour have said that they expect it unlikely they will force a General Election and the likeliest resolution will be a People’s Vote. John McDonnell said he would vote Remain. Even though I have believed this since the referendum, there have been times of doubt. It is good to see my prediction confirmed.

We celebrated with sea bass en papillotte and roasted peppers with a chilled bottle of Rioja. We leave on Friday so we are having to eat down the fridge/freezer and drink the wine cellar. It’s a nightmare.

Another, glorious day for our last full one this month. We leave for the airport tomorrow morning and Gatwick tomorrow evening. Today was relaxing including another hour of swimming. We were really lazy and sat around the pool in the sunshine. We’ll quite miss this street. It is quiet, sunny and private.

I have written before that we don’t go ‘on holiday’ but just live somewhere else for a while. This is exactly what we’ve been doing here. We’ve really enjoyed ourselves and our destination but we will happily say farewell and move on. We do not have any emotional attachment to the place. It provided us with exactly what we wanted and that is it.

Tomorrow morning we will hail a cab to the airport and fly back to the West Sussex coast for Christmas. As residents of Erehwon, we will start to plan our next residence.

It doesn’t matter how experienced we are at travelling or how blasé we become or how much we are enjoying the experience, Pauline & I always react in the same way. A couple of days before, we anticipate leaving and want to get on with it. The day of leaving, we are always ready far too early and itching to move. And so it was at the end of this month. This morning, having gone to bed around midnight, I was awake and raring to get going soon after 5.00am. Actually, we didn’t get up until just before 6.00 am, had a liquid breakfast, finished the packing, downloaded our newspapers and emails and went through the routines for leaving. Outside, everything suggested another, lovely day but, when you’ve got to go, you’ve got to go.

In this case, we are not in a hotel so we made sure all the furniture that we had placed to suit our routines were replaced into the owner’s choice. We cleaned the house although a team of cleaners would almost certainly blitz the villa as soon as we left. Suitcases outside, all doors and windows locked, final check of bags, documents, valuables, etc., and we were off. We took the first taxi which was waiting. Unfortunately, it was driven by a madman who had obviously got anger management problems and was determined to vent his spleen on anyone within 100ms of his car. What it did mean was that the journey to the airport was very quick and cheap – about €15.00 – and we still managed to live to tell the tale.

Airports are so much more user-friendly nowadays. I remember queuing for hours in what amounted to a cattle shed for tourists at the old, Athens airport. It was almost as if they weren’t interested in our comfort and pleasure. Of course, we were poor, young teachers then. Now, you can turn up and drop your bags any time you choose. We were in the airport 4hrs before flying. Having dropped off our bags, we went through passport control without being checked, went through security in literally 5 mins and then on to the only private lounge in the airport – Sala Montana Roja – which was amazingly quiet. Admittedly, it is not the greatest offering we have seen but it was comfortable, peaceful and provided refreshments. I picked up a bottle of white wine, a bowl of olives and some Iberico Ham and we whiled away about 3 hrs with our iPads.

I don’t know if I told you but I had bought Tui flights because they fitted our timings perfectly. They were actually much more expensive than Easyjet which also flies out of Gatwick or Ryanair which goes from the ungodly Stanstead. The planes, the service both in the airport and on the plane are absolutely excellent. Their punctuality pleased us and we’d happily book with them again. Landing at Gatwick around 7.00 pm, our bags were quickly off and we met our taxi driver. We chose not to chat much as he drove us home on a journey of about an hour We did learn that he had been a taxi driver all his life and, in his spare time, made fitments for dolls’ houses. We didn’t pursue that too much in case it went where we didn’t want to go. What he did do was drive us through our village square which was lit up for Christmas which was nice – or something. 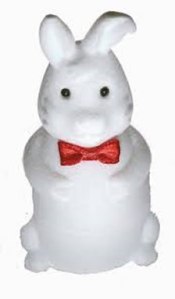 Anyway, don’t be put off by me. You enjoy the new month, the forthcoming celebrations and the welcoming of a new year with all the possibilities that it should bring. Have a lovely weekend. I’m off to Sainsburys.

Spoke too soon. I’m off to Tesco because Pauline has squillions of pounds in vouchers to redeem by the end of this week. Tesco in West Durrington is like an aircraft hangar with food. Today is supposed to be the busiest shopping day before Christmas according to the BBC but you can’t trust them and their ‘fake’ vicars. Actually, as this hastily snatched photo shows, in spite of all the shoppers, it still looks fairly empty. We bought a turkey as we do every year. It’s not for Christmas day but to make stock for soup and to supplement the gravy on the big day. We bought lots of fish, a big chicken and two tons of vegetables and fruit plus all the ingredients for three Christmas cakes and two Christmas puddings (Don’t ask.).

The whole bill came to about £170.00/€192.00 but we actually paid about £140.00./€158.00 and we had about 15 vouchers giving us points towards our next £25.00/€28.00 off. Most of this largesse is because we’ve been away for a month and Tesco have begun to panic that we’ve left them for a rival. Their rivals are panicking for the same reason and also trying to entice us back. It is lovely to hold a strong hand for a while but they’ll soon all twig.