Not a pleasant day. It has rained fairly heavily for most of it. It has been dark as well although not cold. Our reaction has been to stay indoors. Relaxing doesn’t come easily at 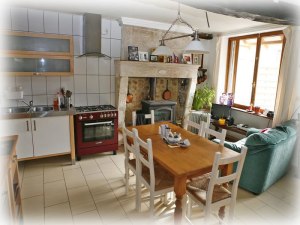 the moment and I felt listless throughout the day. Political programmes, newspapers and a football match were the day’s distractions. Pauline served a wonderful, homemade, smoked salmon and poached salmon terrine which we ate with salad.

I did a bit of research on a short trip to Valencia in late April or early May at the time of the orange blossom. Found a lovely hotel and EasyJet flights which were very cost effective. Four days in Valencia in May will cost us half the price of our four day trip to Athens in September. It is nearly four years since we sold our Greek house and five since 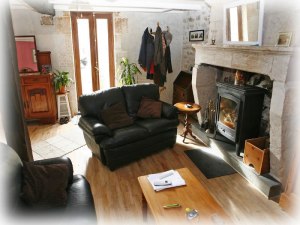 my friend and ex-colleague, Brian, sold his property in the Dordogne.

He contacted me today because he had found it for sale after the person he sold it to had finished the renovation. Brian sold it on partly refurbished five years ago for £42,000.00/€47,500.00 and he found it on re-sale today at £146,000.00/€165,000.00. It is a lovely, little cottage with a number of out-buildings which are ripe for development. Of course, he sold before the referendum and the subsequent crash in the Pound but he doesn’t really regret it. He has moved on with other areas of his life. And so have we.

It rained over night but dried up soon this morning and was distinctly warmer than of late. We were around 11C/52F as the day progressed. We set off around 9.30 am for Surrey and P&C’s. It is a delightful journey which took about an hour. We sat and talked over coffee

for a couple of hours and then revisited our old property to see how it was faring before driving back to Sussex.

I cooked chicken thighs with peppers, mushrooms and onions for our meal and we went through the post. It included the apparatus for the ‘poo test’ which we are doing for the fourth time. Every two years from the age of 60, 62, 64 and now, 66. We will do it for another four occasions until we are 74. I read recently that they are going to start at 50 soon. Just hope people take it up and aren’t squeamish. I included extra onions and olive oil in the meal today to smooth the test’s progress. Now where are the surgical gloves? 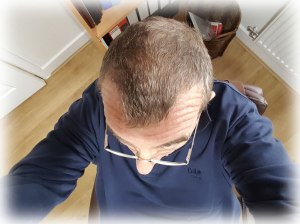 What a depressingly dark, wet, misty day. I even woke up feeling fed up. Someone keeps stealing my hair in the night. It is getting thinner and thinner. At Grammar School more than 50 years ago, teachers said they saw me entering a room 10 mins  before I arrived because my ‘quiff’ was so resplendent.

If you don’t know what a quiff was, you’ll have to google it. Certainly, they would not say it now and I couldn’t grow a quiff now either. The only good thing is that I rarely see my own deficiency because it is behind me temporally and actually. I’ll have to do a Rooney and have it stitched back in.

We did a work out in the gym today but missed out on our swim because the rain and gloom was so insistent that we could not face it. As we drove home I received a text message from an old friend – Caroline who I employed as an School Attendance Officer in the 1980s. She was actually a past pupil of my school although long before I arrived.

As one of the ancillary staff, she maintains friendship groups with other non-teaching staff and had gathered together two others from the dim and distant past. We visit Little Viv regularly when we drive back but Iris, who was School Office Manager, I haven’t seen for 25 years. The text I received brought back lovely memories even if it won’t bring back my hair.

Another soggy day. Another day of no outdoor swimming. We still did our gym work but can’t wait to go outside in the pool again. Tomorrow that looks possible. We were at 11C/52F which is about average down here for the time of year but these depressingly dark days do leave one yearning for something warmer and brighter. On that score, Pauline has found a new build property on the southern coast of Tenerife that is in the price bracket that we would be prepared to commit. She has sent for more details and will build up a portfolio of available properties for us to look at when we spend our month out there. I am now preparing to fix a short break to Valencia in May. 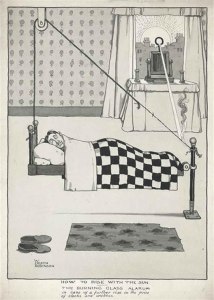 Mum was an Fine Art student and became an Art Teacher at the Girls’ High School. Her particular favourite was Augustus John and she had a number of books of his works. His life drawings of the nude, female form seemed to dominate I seem to remember so I wasn’t encouraged to look through those books. I was reminded of another favourite and a book I was allowed to flick through by an article on my local news tonight.

Heath Robinson, who is now an adjective in his own right, was a designer of wacky and over complicated contraptions of the ‘Wallace & Grommit’ type. There is an Exhibition of Heath Robinson designs in Southampton shortly. Might go and have a look if we can fit it in to our busy, travelling schedule.

Chalk & Cheese. That is the difference between yesterday and today. Grey and wet has given way to blue skies and gorgeous sunshine. Swimming outside this afternoon was almost akin to winter in the Med.. Ironically, the temperatures on both days hovered around 11C/52F.

While I was on the treadmill, I watched the news which was followed by the national weather. As is the custom, a viewer’s weather photo was featured and today it was from someone in Birstall near Leicester. No great import there. Certainly, I have never been there although in one, strange sense, I belong there.

I have lived, like so many of us in the modern world, in many places in my life. I celebrate that fact and feel I fit in perfectly to Theresa May’s vaguely pejorative description of citizens of nowhere. I was born in Repton in Derbyshire and moved away to Ripon in Yorkshire as a student where I lived in ‘digs’ and then a flat above an estate agents and below a rather noisy brothel. I moved to Oldham and lived in a flat in another former (just) brothel. It still had a red light in the hall (which passed innocent me by completely.).

I moved to Meltham in Yorkshire and then on to the village of Helme a few miles away. From there I moved to Longwood in Huddersfield and, briefly, to a small apartment in Salendine Nook a mile away. In the meantime, we were living in the house we designed and had built on the Cycladic island of Sifnos where we lived half the year while we moved for the other half of the year into a duplex apartment in Woking, Surrey. Finally, for now, we have moved to a new build property in Angmering, West Sussex.

Birstall near Leicester is somewhere I have only visited genetically. My name is Sanders and the first record that family research has evidenced is of my ancestors living in Birstall in the 18th Century. Particularly, a boy, Thomas Sanders, was registered as born to the parents of Andrew & Elizabeth Sanders in 1770. There is record of a Thomas & Anne Sanders who died in 1771 and who may have been Andrew’s parents and may be my six times grandparents.

We are already talking about buying a small property – possibly in the Canaries and Pauline hasn’t given up hope of another new house in UK before we are finished – just to keep her hand in. I’ve often wondered if my maternal grandfather, James, Joseph, Jeremiah Coghlan, who was born in Brighton to Irish immigrant parents, was from a long line of travellers and I have inherited restless feet. I certainly didn’t get it from my Dad.

Another day of blue skies and strong sunshine. We did our fourth consecutive day of exercise. I found my muscles arguing back a little today. As we promised ourselves in our New Year Resolutions, we are gradually increasing our effort. We are now doing 70 mins cardio-vascular gym work and I am increasing my swimming from 20 x 25ms by 2 lengths each week for 5 weeks to reach 30 x 25 ms to make 0.75 km per session. It is starting to take its toll. I am up to 26 lengths each day and it is hurting. Even so, my weight is showing the benefit. I am approaching a weight I haven’t seen for more than 30 years and that is spurring me on.

Booked a shopping trip to France next month, taking advantage of the Shuttle’s regular discounting policy. Our tickets cost just £20.00/€22.80 return for the car with as many passengers as we wish to carry. This makes shopping really cost effective. We will do our week’s shop as well as stock up on wine. It’s a pleasant trip as long as the weather is kind. Before we go, we want to have tied up our trip to Valencia in May and one to Athens in September.

A pleasant start to the day with plenty of sunshine but the afternoon brought a bit of rain. We decided to do the gym today because Sunday and Monday we are otherwise engaged. On Monday, we have a British Gas engineer coming to update the software on our smart meter which will, apparently, take a couple of hours. We’ve also got a new window cleaner coming. We’ve sacked the original one who charged £20.00/€22.80 per time and cleaned everything remotely and badly with a pole and water brush. The new one cleans every thing by hand and only charges £18.00/€20.50.

In our continued quest to plan our 2018, we booked a break in Valencia in May. I chose a lovely, 5* Hotel on the edge of the town. SH Valencia Palace has all the things we want like an indoor and an outdoor pool plus an excellent gym. It has a large room with tea/coffee making facilities, free wifi, satellite television and it has a good restaurant. The total cost was about £600.00/€684.00. The flights were booked with EasyJet and cost £240.00/€274.00.

So that’s another part of the plan resolved. Now I just have to secure our Athens trip for September, our Yorkshire trip for October and then work out when we can fit in Edinburgh and Cheltenham. Could be a good year.