As Ruth will clearly remember, in 1887 Ferdinand Tönnies published Gemeinschaft und Gesellschaft or ‘Community & Association’ which first described the contra-distinction between the pre-modern sense of community or family and neighbourhood and the modern concept of atomization in individualism. Gemeinschaft is characterised as the old notion of social relationship in community and is set against what we now consider the norm of organised individualism or society. This latter concept derives its origins from Hobbes concept of the social contract described in Leviathan and Adam Smith’s Wealth of Nations which expounded upon how rational self-interest and competition can lead to economic prosperity.

It is this movement from the old to the new which has always meant so much to me. Born into a large family in a small village, I longed to escape into the anonymity of elsewhere. The fact that it turned out to be Yorkshire, in general, and Huddersfield, in particular, we will gloss over. However, having moved a number of times and lived in different parts of UK and Europe, I very definitely feel myself a ‘Citizen of Nowhere’ or Citizen of the World’ in the modern parlance rather than rooted in community – Bolton, for example. It is liberating and isolating in equal measure.

As France humiliated England by beating them with 10 men, so Theresa May managed to humiliate herself in front of Macron by losing control of her notes in the breeze. This morning, the European Parliament humiliated UK by crowing about our floundering politicians and offering us a chance to turn back from Brexit but on less favourable terms.

It is with those concepts in mind that I look forward to European travel this year – driving through France, Switzerland and Italy; travelling to Greece; holidaying in the Canary Islands. 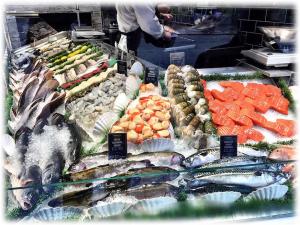 We eat more fish than ever. Red meat is virtually never entertained. In fact, discussing it this morning, we could not remember when we last ate Beef, Lamb or Pork. It can certainly be counted in months. We have almost fallen into this diet without consciously choosing it. I know, medical advice warns of the dangers of eating too much red meat and that may have, subconsciously, influenced us but we didn’t sit down one day and make a formal decision to change. We eat lots of salmon – hot and cold, cod, sea bass, bream, sole, prawns, squid and whitebait. Really, the only meat we eat is chicken, duck and pheasant.

The carbohydrate grouping of bread, potatoes, pasta and rice and derivatives have been off my list for about four years now after I discovered that they built up my blood sugar temporarily and then it crashed soon afterwards leading to my eating again to satisfy it. The other element of denial is green vegetable which contains large amounts of vitamin K. This militates against the blood thinning chemical, Warfarin, that I take for Atrial Fibrillation. I don’t eat no green vegetable but I do it rarely and it is all the more exciting when I do. Today, for example, I positively drooled over a small portion of green, French Beans.

Of course, additionally, we have done formal exercise for a number of years and more intensively in the past couple or so. A blogger I read religiously boasted of ignoring such exercise and diet and taunted us that he was doing so while eating pizza. That is so unkind it can barely be lived with. Occasionally, if I dream of breaking out from the straightjacket that I have fashioned for myself, I dream of PIZZA or Rissotto. I don’t follow that dream just as I have never smoked a cigarette since 9.30 pm on the 15th October, 1984 when I sat in a Masters tutorial and decided to give up my 40 a day habit. I fear that one slip could lead to total collapse.

Roast salmon topped with (homemade) pesto crust with tomato & (peeled) cucumber salad was the order of today followed by a small amount of apple and yoghurt. It has an extremely ‘clean’ taste and a distinct lack of heaviness that carbohydrate engenders. I find that it doesn’t make me feel sluggish or bloated and doesn’t lead to sugar rushes and crashes which encourage repeated needs to eat.

Glorious day of blue sky and sunshine and 22C/70F. We have spent most of it outside. We have done a really enjoyable gym session but the garden has called today. We cooked Whitebait out there this afternoon which we ate with salad and a New Zealand Pinot Grigio. No Pizza! Life is sweet!

You can’t beat a good spreadsheet and I don’t try to. I have spreadsheets to tabulate and record so many things. With only a couple of weeks to go, my most pressing spreadsheet records places in Europe, hotels in places in Europe, distances to drive between hotels, nights booked in hotels and places of interest to visit while there.

Today, I have been researching trips out from our hotel in Tuscany. Trying to park in major tourist towns in Italy is not advisable so we will travel from Lucca to Florence and Pisa by train. The Italian train company is incredibly cheap and quick with a 90 mins trip costing just €12.00/£10.50 and leaving every 20 mins.. A trip to Pisa takes just 30 mins and costs €6.00/£5.25. The last train journey we made was an absolute nightmare. If these are cocked up, it will be more genitalia than Trenitalia! We are already researching long term lets in Tuscany for next year. This summer, we will check them out and make a decision. 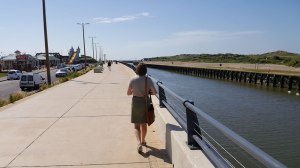 It’s one of those days. The sky is clear. The sun is strong and the temperature is 27C/80F. We decided to take a break from the gym and to drive down to the trawler shop on Littlehampton Pier. It was delightful to walk on and not too busy because the schools are back. We had a good walk in the Marina and drew the sea air into our nostrils before calling at the fish shack to buy two, big, fresh, Sea bass for our meal.

Some mothers were on the beach and supervising their pre-school children as they swam in the sea. Cockle & Whelk stalls were open in anticipation of the season and older people sat around the coffee shops on the edge of the beach. Rather like Sifnos, it is a place waiting to happen. I met this gorgeous girl on my walk along the promenade.

Another lovely day to mark mid-June. Already, the Summer is galloping along. The temperature in our back garden this morning was 25C/76F in the shade. There was just a hint of a breeze off the sea. We did a full supermarket shop and then a big Health Club session. I am, currently, absolutely knackered but happy. We have eaten Roast Cod Loin with King Prawns and fresh Dill (from our pots) with Asparagus and Broadbean Salad. Michael would have loved it!

Back in the real world, if you wanted a visual explanation of the General Election result, it is provided by the party leaders’ response to the tower block fire in London last night. Theresa May went down to speak to the firefighters and left without speaking to bewildered residents. Jeremy Corbyn went in to the groups of survivors, cuddling, consoling and offering help. May has learnt nothing from her Election debacle when she spoke in a sterile environment to carefully selected party workers while Corbyn was wowing the crowds on his tour of the country and interacting with everyman.

Rising interest rates are being signalled by 3 members of the Bank of England’s Monetary Policy Committee as UK is hit by a perfect storm of a falling economy and a rising inflation. The former militates against raising interest rates while the latter demands it. What a position from which to approach Brexit!

High Summer meets mid-June as the temperatures rise towards the 30sC. We decided to do a couple of gym sessions over the weekend and allow ourselves time at home today. Lawns cut, car washed. House vacuumed and hard floors steam cleaned. We feel seriously in control of our environment. Our meal of griddled chicken and salad was cooked outside in the garden under strong sunshine. 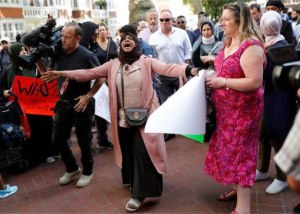 The backdrop or mood music of the day has been created by the increasingly febrile reaction of sufferers and activists, reacting to or hyping up the tower block fire in Kensington. The pressure point has focussed on mortality numbers which have been under-reported / played down and have moved, under pressure, from 6 to 17 to 30 and now 70. Celebrities, using their ‘status’, have appeared on the media openly challenging these numbers and reporting first hand accounts of 100 – 200 deaths. The media has been quick to shut them down. One celebrity had been booked to appear on Newsnight but was quickly replaced because she had challenged the official line earlier in the day. The political Blogs are alive with rumours of ‘D’ Notices being imposed upon the media by the government to limit the furore. If it is true, they will fail.

A delicious, Summer’s day which saw a temperature of 27C/81F here. We spent the morning in the garden and I put the sprinkler system on for a couple of hours. By 2.00 pm,

we were working hard in the gym which was quiet as workers made the most of the sun. This evening is rather uncomfortably warm and we know that temperatures tomorrow, Monday and Tuesday are forecast to touch 30C/86F so we need to pace ourselves.

At 2.oo pm yesterday, I ordered a cordless hedge cutter on-line from GTECH. At 10.00 am this morning, it was delivered to my door. It came ready charged but I will try it out next week so as not to annoy the neighbours with the noise. Looks an excellent machine though. We now have their vacuum cleaner plus hand held, their lawn mower and their hedge trimmer. They are so convenient without an electrical cord that I would recommend them to anyone. I had a slight problem with one element of the vacuum cleaner which has a 2 year warranty. I phoned for advice and received a replacement the next day.

As a ‘new man’ who revels in house work – well, using gadgets, actually, – I celebrate this day every year for a special reason. It is on this day in 1980 that someone went out of control in his car on the bend as we approached our school and cut our first new car – a 2 month old, pageant blue mini – in to pieces. Pauline was badly cut and bruised. I was thought to be dead but revived and I spent two weeks in  hospital unconscious with brain bruising. It took the best part of a year to recover from that set back and I would never have done it without the patience and dedicated love of my wonderful wife.

Looking out as the sun beats down from a clear, blue sky on our lush, green lawns with birds singing heartily and with so much life left to live, I reflect on the 37 years of time I might have lost just there. For that reason, I empathise and celebrate with the Skiathan and his wife whether they are eating pizza or not. She has fought back from Stage 4 cancer and critical surgery and is now cancer-free. Life can feel very good at times not least when you fear losing it!