Glorious mid-summer’s day that reached 23C/73F at its peak. We were out early for a walk along Littlehampton Marina. Lots of other people and their dogs seem to have had the same idea but we did an hour’s walking without too many obstacles. Everyone was taking advantage of the weekend and the lovely weather. On the

water and on the beach people were making the most of it.

There seemed to be boats of all sorts moving out of the Marina and a flotilla of sail boats preparing for a ‘race’. Children starting on their school, Easter Holidays were out in force on scooters and being dragged behind pet dogs along the sunny promenade and line fishing for crabs with their Dads leaning over the rails down to the water. At 10.00 am, parents could be heard telling eager youngsters it was too early for ice creams and exhorting them to just enjoy the sunshine and wait. 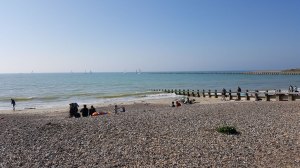 We walked along the edge of the beach for 30 mins from Littlehampton towards Goring and then turned round and came back. All along the beach, small pockets of families were settling down for the day with picnics and towels. Small children were dashing excitedly in and out of the water. All those with fully developed brains were keenly avoiding the water all together. Thank goodness we no longer have to manage those exuberant and nascent psychologies .

At home, we did a couple of hours of gardening – trimming the lawn edges and cutting back and shaping up the hedges. All around us, the distinct smell of barbecues were drifting across the area. We had chosen an electric griddle outside to cook onion slices, mushrooms and fillet steaks. It produced the most delightful meal and a day to remember!

A bit cooler than yesterday but lovely and sunny and reaching 16C/61F by early afternoon. We decided to do gardening rather than gym work today. I mowed the lawns, weeded the beds and finished clipping the hedges. Just finished as the bin men collected our garden refuse bin. Today, we have all three bins – Black ‘general’ waste, Green ‘recycle’ waste and brown ‘garden’ waste collected today. Next week, it will just be black. the service is fantastic and ‘nearly’ encourages me to recycle.

We went out to Worthing sea front to go to M&S and then on to Wilkos for some external varnish for our garden furniture. There were lots of tourists around in spite of the cooler temperatures.

We went on to buy bags of ornamental bark for top mulching the beds and we picked up some nice plants at the same time. The plants which are illustrated here lined up against the back lawn are:

A lovely day that reached 16C/61F in our back garden. We tried to keep active this morning. We finished pruning the young hedging plants, planted out our recent purchases from local Garden Centres and top dressed with ornamental bark. It’s hardly Wisley RHS but it is a bit of fun. It’s also amazing how much time and energy it takes.

In Yorkshire, we had an acre of land to manage while holding down very demanding jobs. Weekends were spent doing all the housework and the gardening. In Greece, we had huge amounts of land to maintain although, being away half the year made it much more demanding. This house is just right for retired people who want to dabble but not take it too seriously or allow it to consume too much time. I am thinking of planting a couple of Brown Turkey Figs in a hot and sunny, sheltered part of the back garden. We loved them in our Greek garden and it would be an interesting challenge to get them fruiting in Sussex.

Had a huge session at the Health Club. The gym is being upgraded and all the equipment has been moved upstairs to the indoors tennis courts. It means that we have to exercise without the distraction of television. I thought it would be harder but soon got lost in my head and found 40 mins on the jogger had ended before I finished planning the next trip. We did 20 more mins on a cycle and then went in the Jacuzzi. I felt bad about skipping the outdoor pool but it is School Holidays and it looked as if CHILDREN might be allowed in to swim.

A little cooler this morning at 10C/50F and will only get to 14C/57F. My breakfast consists of fresh orange juice, tea followed by fresh coffee. It is a liquid diet. It relies heavily on electricity and gadgets. The tea requires an electrical kettle; the coffee is produced by my dream machine coffee maker. The orange juice is spun out of an electric citrus press attached to a Kenwood Food Processor. Pauline already has a heavy duty Kenwood Chef  Mixer. It’s a bit big to lug out every morning just to juice a couple of oranges so she bought a light weight Processor. Today it failed. Actually, it has been temperamental for a few days and Pauline has even questioned the viability of some sockets in the kitchen. Today the machine made my orange juice and then died. (RIP in the bin.)

We both looked at each other and said, That didn’t last long. And we traced back when we bought it. It was then we realised that we bought it along with a sausage maker and a deep fat fryer using Pauline’s ‘Long Service’ award. I don’t know if it happens in other authorities but teachers in Oldham received an award of £200.00/€236.00 for completing 30 years continuous service at the LEA.  When all around us in industry were receiving large, annual bonuses, this seemed more like a patronising slap in the face than an award. People bought ironic items with the cash. My friend, Sam, bought a set of tyres for his car in the 1980s. Pauline bought kitchen equipment with hers in the 2003/4 school year. All the equipment was sent in the container to our Greek home.

So that Food Processor has only lived 13 years in two separate countries and 5 separate homes. They just don’t make things to last any more! Actually, it has proved impossible to replace speedily. Don’t tell the Brexiteers but we are going to replace it with a German one. The Bosch is the one Pauline has chosen and ordered for £109.99/€130.00.

Unfortunately, it will not be available for collection for another couple of days. I am going to have to squeeze my oranges MANUALLY! I won’t need to go to the gym. 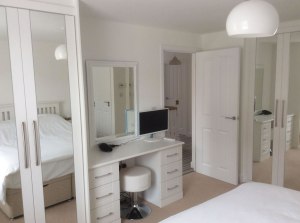 A year ago, we moved in to our new house and proceeded to look round for a supplier and fitter of bedroom furniture. We found one called Betta Living. They came round, measured up and quoted us a price of just under £15,000.00/€17,700.00. We thought it was reasonable and agreed. They offered us a deal to not pay for a year and then pay off in full or pay back over 5 years by which time we would have paid nearer £30,000.00/€35,400.00. We asked if the price would be reduced for immediate settlement but were told not. It made sense to keep the cash in our bank rather than theirs and we accepted the arrangement. This week, we arranged to pay off the full amount. When we contacted the finance company, they sounded surprised we didn’t want to repay double the original figure.

Turned in to a lovely, warm day after a cool start. We actually reached 18C/65F in the afternoon. Pauline took advantage of it to wood-treat the out door furniture. She loves doing things like that and always does them well. I encourage it!

The morning was exasperating because of the traffic on our shopping trip. The trend in UK nowadays is to eschew the once-a-week trip to one supermarket and to go many times for individual purchases instead. This has encouraged large chains to rein back on their building of superstores and to move to opening smaller, more ‘local’ branches.

During the recession, people have become more ‘savvy’ and less ‘loyal’ and have been researching products and prices – often with the aid of on-line devices like MySupermarket – and then visiting lots of different outlets with precise purchases in mind. This particularly appeals to parsimonious me who likes to find a bargain and then corner the market.

With that in mind, Thursday morning is no longer a trip to Sainsbury’s for the weekly shop. Pauline has done the research and we are setting off for Asda (Bananas & Oranges), Sainsbury’s (Figs & Smoked Mackerel + Argos), Waitrose (Yoghurt) and Tesco (everything else). Even though it is school holidays and the roads should be quieter, the queues were dispiriting. The roads are being dug up everywhere for ‘services’ pipes to supply the new developments. Of course, everyone is up in arms about the pressures being put on the local infrastructure by these comers-in. I wonder how long it will be before we are up in arms about these comers-in! We’ll have to give it a day or two yet.

Well it’s started out as a lovely, sunny morning. I’m going to take advantage of that for mowing the lawns and cleaning the car. Yes, I know I’m being very daring but that’s me.

I am still getting very strange feelings about aging. A couple of days ago I viewed a Faceache page which contained a photo of a young man getting married in 1974. I last saw that young man 46 years ago at college and the memories were triggered and flooding through my mind. I was training to be a teacher. Peter was in my year but suddenly dropped out and I think went on to be a business man. No prizes for who made the right decision.

Yesterday, like most days, I was reading the local newspapers from places where I’ve lived and worked. The Littlehampton Gazette gave way to the Derby Telegraph and then the Huddersfield Examiner followed by the Oldham Chronicle. Up popped this young man sitting in front of his class. John Fidler is 77 and has run the town’s Local History classes for at least 30 years. He was Head of History in my school and, like most historians, extremely enthusiastic. In John’s case, he had attended my school from its inception in 1951 – the year I was born. I am walking past the open door of his classroom now as his voice booms out across the centuries. Where has it all gone?

The day started off beautifully with lovely sunshine but most people around here missed it. It’s strange but they always seem to stay in bed at the weekends. We were up at 7.00 am as usual. By the time people in the neighbourhood started moving, the sun had gone and with a brisk, sea breeze, the temperature was a rather chilly 12C/54F. 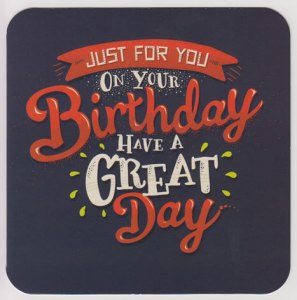 I didn’t think there would be any post today but I got a very unusual delivery. It looked like a greetings card addressed to me and my birthday was last week. Actually, the card had part of our address on it but had ‘IRELAND’ printed ominously at the bottom. When I looked carefully at the envelope, the post code was BT6 which isn’t ours. I looked it up on the internet and it is the postcode for south Belfast.

Of course, the card was from my lovely, old sister who lives in the North of England. Belfast / Sussex – They’re easy to confuse when you’re nearly 70! Still, it is the thought that counts and she did take the trouble to go out and buy me a card which is lovely. I may decide to have my birthday on April 15th in future.