On to the M1 and the skies cleared. By the time we reached Derbyshire, the sun was out. The Repton countryside looked quite delightful although Autumn appeared to
be a little further advanced than in Sussex. The village was little changed. 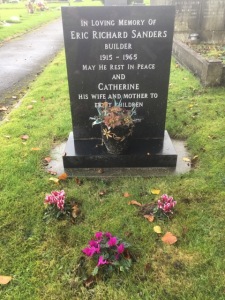 We drove down Boot Hill to Monsom Lane to say Hello to Mum & Dad. The grave looks good and someone had planted small cyclamen in the ground at the front. I always visit at this time to coincide with Pauline’s Mum’s anniversary as well. It is Autumn and usually damp, misty and the grave is poignantly strewn with colourful but dead leaves. It is eight years since she died and the raw emotion is no longer there but has been replaced with region and judgement.

We usually do a quick circle of the village before leaving and that is what we did this morning. The problem was traffic. We couldn’t drive slowly and look because we constantly had someone on our tail. We turned round in The Square and headed for Yorkshire. Past Meadowhall Shopping Centre the motorway is being worked on for more than twelve months. It is going to be a ‘smart’ motorway. It feels anything but at the moment. Check-in at our hotel in Brighouse is 2.00 pm. We arrived, after seven hours, at 1.55 pm. Our suite was ready and we settled down to our newspapers with a glass of wine and some nuts.

Woke up very tired after yesterday. Down to Breakfast at 8.00 am and then off to Bolton around 10.00 am. We were going to meet up with my big sister, Ruth, and her husband, Kevan. We were there just before 11.00 am and it was lovely to see them. You can see how big Ruth is.

We talked and drank coffee in the Bolton Oasis for a couple of hours and then set off for Oldham. Our destination was the coffee shop at Oldham Library. We were meeting our dear friend, Viv, who ran our Reprographics Department but who is now a Carer for her Mother. As we were walking from the carpark, I noticed an Asian man who I thought I recognised. I speculatively asked him if he attended our school and he confirmed he was Nurul (I remembered his surname, Hacque, and his twin, Abdul.). I remember him as one of two, beautiful, little twin brothers. He said he was 31 which meant he had left 15 years ago. Fully bearded and pushing a pram, Nurul was a lifetime away from the boy I remember …. so is my teaching career. The loss of the years makes me ache!

After Breakfast, we set off for Oldham Crematorium. It is the 6th anniversary of Mum Barnes death. She would be 102 now. As so often, the autumnal weather was damp, misty and a little chilly. Soggy brown leaves littered the crematorium’s pathways. Mum’s name, in Itallic Script, was there for this day in the Memorial Book. We don’t stay too long but just enough to concentrate our memories.

On to the here and now. We sourced Colin’s ‘Holland’s Pies’ and oven-bottom muffins which he misses from his Lancashire life.Then on to Shaw to visit my old friend, Brian. He and his wife, Val, are four years older than us but we are still confronting the same things in our lives. I took him a case of wine for his 69th birthday last week. We stayed a couple of hours and then drove back over the Pennines to our hotel.

At around 2.00 pm, we set off for Holmfirth to meet Margaret & Tony. We met for ‘Afternoon Tea’ at the The Spiced Pear. We were amazed to find the converted, stone pub was packed. I had a pot of Yorkshire Tea. The others stuffed their faces with crustless sandwiches, chocolate cakes, scones with jam and clotted cream, etc..

It is always hard to part. We are leaving a previous life and moving forward. It is a bitter-sweet event that tells us we have moved on and can never go back. It hurts. It hurts the sentimental amongst us. It hurts ME!

Paid for the early night by waking up at 4.00 am. Had to listen to the Trump v Clinton debate to lull myself back to a fitful sleep but got up three hours later feeling tired. We had to do our shopping so went out earlyish. Back by 11.00 am. We were supposed to be going to the gym but I was completely knackered so we sat around reading and thinking of jobs we should be doing. While we were away in Yorkshire, half a dozen mushrooms appeared on the back lawn. I picked them off carefully so as not to spread the spores. They look as if garlic and olive oil would turn them into a meal. Would you trust my judgement? I wouldn’t! I bet Jane B.G. would know if they are dangerous. Where is she when you need her? 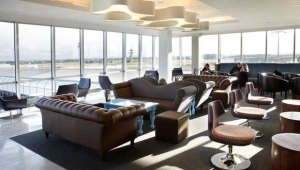 Had to ‘Check-in’ for our flights to Tenerife this afternoon. Effortless when it is from the computer chair in my Home Office. Pity we can’t do the ‘Bag Drop’ from here as well. Because we are going for a month and flying at 8.00 am, we are going to take a taxi to an airport hotel at Gatwick so we are on-site already when we drop off our bags and relax in the No1 Gatwick Members’ Lounge. It will make the transition in to ‘holiday mode’ all the easier as we move from this hectic pace of every day retirement.

A bright and cheery but chilly start to the day. At 8.00 am, it was just 9C/48F. At 8.00 am in Tenerife this morning it was 23C/73F which will do for the next month. We were out fairly early to have our ‘Flu jabs. When we got to the counter to book in, the receptionist queried whether we were both 65 years old and qualifying for ‘free’ treatment. When Pauline confirmed our ages, the receptionist expressed real surprise that we were that old. I saw Pauline’s face light up with pleasure. We sat down to wait and saw an old lady hobble up to the counter and enquire about her ‘Flu jab. Subsequently, she came to sit by me and said,

I didn’t disillusion her .. or Pauline although I did check my own appearance in the mirror and preened a little.

As we arrived home, the mail was on the mat and Pauline had the all-clear from her recent mammogram. I know I’ve only got eleven more years to live but, apart from BREXIT, things seem to be going rather well at the moment.

We received our first water bill from Southern Water this morning. Pauline had allocated £250.00 and it came in at £230.00. That’s fine but what was quite shocking was the fact that the charge for fresh water was just £80.00. The rest was accounted for by dirty water disposal and treatment. That was a hell of an expensive penny to spend!

Happy 59th Birthday to the twins – Mike & Liz. I hope they enjoy their last year before they come of age – The Third Age!

A delightful day of clear, blue skies and strong, autumnal sun. It’s Saturday and the 59th 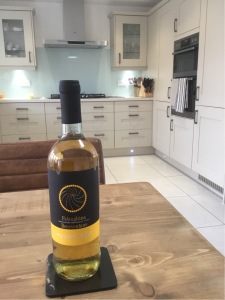 birthday of my little, twin sister and brother – Liz & Mike. It is hard to believe and just a little scary! Am I old? I valeted the car and felt shattered after that. Is that age?

We had to go out and collect our last repeat prescription issued by our Surrey Surgery just seven months after we left. Tomorrow we will complete the forms for our new, Angmering Practice although we won’t see them until we return from Tenerife in December.

We ate a glorious meal of whitebait (Merides), garlic sauce (skordalia) and tomato & cucumber salad (Salata). This was accompanied by a chilled, white wine (Domestika?). It was deep fried outside and we ate it outside in the garden in the warm sun. Two football matches today plus the newspapers. Pauline will be watching ‘Strictly’ while I do correspondence.