We try to do five sessions at the Health Club each week lasting between 90 mins. and 2 hours. During the week I do 25 kilometres – Jane BG would probably call it 25K because she’s youthful and ‘cool’ but I can’t bring myself to do it. I heard a mother call her daughters the other day, Come on Guys! and I thought I’d moved to a different country. It makes me feel antediluvian but I just can’t bring myself to do it. While completing 25 kilometres, I climb 1000 metres and burn 3100 calories. That is nearly two days allowance over the week. Aside from the statistics, it gives me a wonderful sense of self confidence which is really affirming as I grow older.

We did a two hour stint today. En route, we called at the taxi office to cancel our recently booked trip to Gatwick Airport. We will now drive ourselves to the Long Stay Car Park and leave the car for a month for little more than the return taxi fare. At the Health Club, we booked in at 11.00 am which is considered ‘Peak Time’ but nobody seems to care. We pay a considerably reduced rate as ‘off peak’ members but it doesn’t seem to matter. We go for 11.00 am on Sunday because Sunday Politics starts then and helps me through the exercise.

Tomorrow is our last chance to meet with the builders before our month away. We are driving down first thing in the morning. Today, we are reviewing all the options that we will have to address in our meeting.

Because we will be away, we will have to make irrevocable decisions tomorrow while on site.

We know already that we are going to enjoy exploring this area both coastal and inland.

The journey to Angmering took an hour. We arrived at the house by 10.30 am to meet the builder’s sales rep.. The roof is on and they expect the windows and doors to be fitted in the next couple of weeks while we are in Tenerife. They are making such good progress and with a mild winter forecast by the Met.Office today, work may well be finished a month early. If we like the hotel in Tenerife, we will try to book a second month in Jan./Feb. in the lead up to moving in. We just have to use the time in December to research and order furniture before Christmas to be delivered a couple of months later.

We were there for a full-on three hour session. We chose the kitchen units and flooring. Pauline chose this style kitchen although it will be accompanied by large, stone floor tiles and will have an innovative wrap around opaque glass wall covering between upper and lower cabinets. 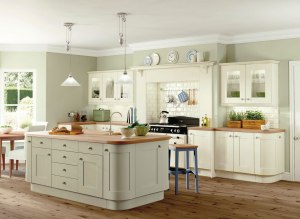 We chose all the things I listed yesterday plus lots of things I hadn’t mentioned like additional sockets, tv/multimedia panels, etc. Three hours later and at least £25,000 lighter, we staggered out feeling rather drained as we used to do after the first day back at work after the Summer Holidays. Even so, we are very lucky and felt it.

Our instinct was to go out to eat after all that but we fought it and, not having done a gym session today, went back and ate cold chicken with Greek Salad. Afterwards, we were pleased with our choices.

Very mild and sunny day today. The temperature reached 18C/65F. We did a wonderfully exhausting two hour session at the Health Club today and then made crab and prawn salad for our meal. Tomorrow, we have to address the weeks ahead by selecting clothes for the month in Tenerife. Pauline will have her hair cut and I will do our accounts based on yesterday’s expenditure.

A damp but mild day. We drove over to P&C’s to organise things for our forthcoming trip. It’s not easy packing suitcases whilst living out of suitcases but we’ll cope! We decided to give the Health Club a miss today and our bodies heaved a sigh of gratitude. We took advantage of ‘free’ time to go shopping. We wanted to look at a new, tumble dryer. The last one we bought cost £100.00. The new one will cost £800.00. It is a concept I’m not familiar with and don’t yet understand – a condenser/heat pump tumble dryer.

While we were in Curry’s, we looked for televisions. We will have television points fitted in Lounge, Kitchen/Family Room, Study and each of four bedrooms. Seven televisions seems excessive but, if we are going to do it, we might as well do it properly. Televisions are amazingly cheap now.

We went on to look at beds. We sold our wonderful, 2000 pocket sprung bed and we have to replace it with an equal or better. Of the four bedrooms, three will have beds and the fourth, Pauline’s ironing room, will have a sofa-bed. The plan is that we will buy one bed and trial it. If it’s good, we’ll buy two more. If it’s not, it will move to bedroom 3 and we will trial another and so on until we are satisfied.

I cooked today to give Pauline a rest – chicken thighs with garlic and oregano accompanied by roasted green peppers, shallots and celery. I hit lucky and it was delicious. Afterwards, I took Pauline for a late afternoon hairdresser’s appointment in preparation for our month abroad. By the time we get back, Roof, windows and doors should be done and the team will be on ‘first-fix’ electrics. The weather can do what it likes.

A damp morning. The family we are staying with are all going to a tennis tournament. We are going to do our exercise in the Health Club. Before that, we are addressing peripheral issues involved in the house build. The problem with buying off-plan or build-your-own, as we have done twice before, is that practical living is not easy to envisage. Really, what one needs is to spend a few weeks in the actual house and then tweak the set up. Because of that, Pauline & I have been trying to imagine usage based on the floor plan. Today we have decided to make a few tweaks before we go away and it is too late. We have decided that we need some extra electrical sockets – three more doubles in the lounge and two more doubles in the study. If we don’t do it now, they will be gouging out plaster to insert them more expensively later. Pauline also wants the radiator in the utility room replacing by a heated towel rail. This has all been marked up on the floor plans and will be sent over to the builders.

This evening, we are joining a large party for dinner at a local Mediterranean-style restaurant. It is simple but pleasant. My only problem is choosing dishes that fit in to my diet. I usually face the dilemma of eating only parts of meals or suspending my personal regime for the occasion. I suspect that I will do the latter tonight.

As October comes to an end, everything I read and hear confirms how right we were to sell up and leave Greece. The Greek government are broke and still caught between Scylla and Charybdis. One the one hand, they have their electorate and, on the other, they have their creditors. They tell one group one thing and the other another thing. Unfortunately, they will not get the money unless they do as they are told. Like all Greeks, they are used to getting away with saying one thing and then doing what they want. We learnt that from Stavros. With the Germans, it just won’t wash.

It is no wonder that the Greek housing market continues to suffer. In fact, it has been in free-fall for the past couple of years. As Kathimerini says,

Greece is once again in last position in an international survey on the growth of property prices, posting a 5.9 percent annual decrease in the third quarter of the year, according to the House-Price Index compiled by The Economist. The Greek property market has had the worst performance among the 26 countries monitored in the survey, with Singapore just above Greece with a 3.7 percent yearly decline in the July-September period. Just five out of all the countries monitored have posted a price decline.

To make matters worse, the article calculates that current earnings suggest there is another reduction of 17% built in to the property market. If you’ve invested in property in Greece recently, you’re going to need to live a long time before you see a positive value.