This day last year we were  shopping in Reims and preparing for the last leg of our European journey from Greece to Surrey. So much has happened in that year – not least in the decline of Greece. Fascinating article in The Sunday Times today about the whole debacle which will leave Greece in austerity limbo and lead to the end of Merkel.

Forcing the Greeks to submit to a diktat already feels like a pyrrhic victory for the Germans. Indeed, she might echo Pyrrhus himself: “One more such victory over the Romans and we are lost.” The deal she struck with Alexis Tsipras has been greeted with derision and dismay on all sides: from Athens to Berlin, from the mandarins of the International Monetary Fund to the middle-class taxpayers of small towns in Germany, to whom Merkel owes her power. “Merkel saves Greece with our money!” howled the front page of Bild.

They are predicting Merkel’s resignation within the next twelve months and Greece’s enslavement for the next twenty years. German newspapers are currently talking about ‘the state formerly known as Greece’ a la FYROM (Former Yugoslav Republic of Macedonia).

A young lady who worked with us, retired from teaching yesterday and made us feel absolutely ancient. We suspect that, after the elation of Friday afternoon on the last day of term, she will just be beginning to feel a hint of anti-climax. We certainly did. In fact, we are into our seventh year of retirement and, this time next year, I will be receiving my pension.

On this day six years ago, we were aboard Superfast V sailing down the Adriatic to Patras on another adventure. A lot has happened between then and now but there is still a lot more to go. Certainly, we are looking forward to setting off for Greece shortly.

We have done an hour or so of gym exercise for the past nine out of ten days. Today, we decided to have a holiday. We had lots of bitty jobs to complete:

When you’re retired, a bunch of small things can fill a day quite easily and leave one wondering how they got done when we were working.

It’s 8.30 in the evening of a wonderful day that has reached a sticky 26C/79F and I am beginning to regret not exercising. Never mind, there will be other days although it was a bit of a shock to read that David Frost’s 31 year old son died jogging yesterday. Gives one pause for thought.

One of those really enjoyable days. The weather has been fine, dry, sunny and warm reaching 25C/77F. Having lived on the island of Sifnos between April and October for fifteen years, I know that July was the month when we felt trapped, confined and limited. It was the month that we went to Athens just to feel alive and ‘normal’ again. Well, today was a wonderfully expansive day when we travelled to Norfolk, Suffolk, Essex, Kent and Surrey in less than 12 hrs.

Up at 5.00 am and out an hour later, we were in Lowestoft by 10.30 am at a wet fish shop on the sea front. Dressed crabs, sole, plaice, skate we loaded into the fridges in our car and then on to Great Yarmouth where we visited Pauline’s relatives who were on holiday there.

A warm – 24C/75F – but not terribly sunny day today. It didn’t matter. We were too knackered to care. After 7 hours driving yesterday, I was still exhausted this morning when I woke. We did go the Health Club but, after 40 minutes in the gym, I gave up. I just couldn’t do it. We came home. After our trip to the fishing port of Lowestoft yesterday, we had a wonderful fresh crab and smoked salmon salad for our meal today. 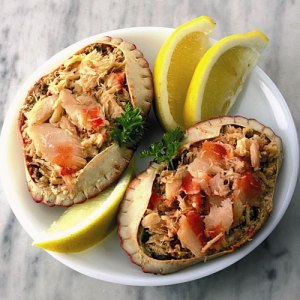 Domestic tourism in Greece has suffered a dramatic downturn as a result of the debt crisis with many Greeks unable to afford to take a holiday. The once busy ferry terminals are a clear indication that all is not well. Comparing ferry traffic data with the same period last year, we see that this year passenger numbers are 40 percent down.

Lissandros Tsilidis from the Hellenic Association of Travel Agencies reported:

Consumers are scared. Scared and terrified. They had to decide whether to go on holiday or to stay home and save money. They have chosen to stay at home. I fear that we will be forced to cut staff, as our main revenue of the high season has gone. 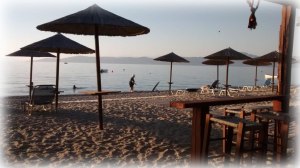 One tourist is getting his money’s worth but then he has it for free! 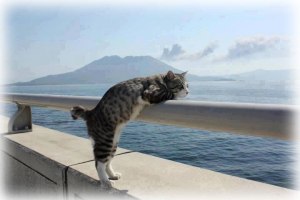 We woke to rain like manna from heaven – if you believe in heaven and that manna could come from it, which I don’t – light becoming heavy. the gardens were groaning with delight – if you believe gardens can groan, which is marginally more plausible than concepts of heaven. We did the main, weekly shop at Sainsbury’s – only £100.00 but free to us because we still have vouchers from our Nat.West Points.

Pauline made a lovely meal of Roast Hake with Skordallia (if you don’t know what that is, ask the Poison Dwarf – although she probably won’t know either – and Greek Salad. We spent the rest of the day on correspondence and financial activities.

It never rains but it pours in Greece as well. Last night an earthquake struck around Nisyros island. It was circa 5 on the Richter Scale so significant and was felt in Rhodes and Kos. We spent three weeks on Nisyros in 1991 and enjoyed this volcanic island. We walked across the hot, smoking, volcanic crater and still have two chunks of rock that we brought back. I listened to my short wave radio, enthralled by reports of the kidnap of Gorbachev which led to the disintegration of the Soviet Union. 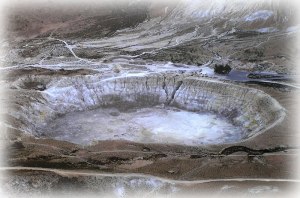 If you want peace and tranquillity, I would recommend Nysiros and Tilos. Also today, Kathimerini features an article headed:

The Greek market may experience food shortages in August if applications to facilitate imports continue to be processed at the current slow rate, the Association of Hellenic Food Enterprises (SEET) warned on Thursday. SEET argued that the first victims will be hotels and tourism in general, as most hotel units do not have the necessary infrastructure to store large quantities of food.

No wonder late bookers are switching to Spain and Turkey.

After twelve hours of rain yesterday, the world looked washed and clean and smelling wonderful. Rain in July! It’s years since we’ve seen it. It was still warm today although I’m pleased to say that we are not expecting the 40C/104F+ heat wave that Greece is forecast to be experiencing in the coming week. Four years ago we suffered 43C/109F on a trip to Athens and just walking from the ferry to a taxi was almost beyond me. I had never known such heat and I hope never to again. We did an hour in the Gym today and really enjoyed it. When I suffered in the heat four years ago, I weighed 10.5 st/66Kgs heavier than I do now. It is a great feeling to be so much fitter.

It’s lucky that we hadn’t decided to start our drive across Europe this weekend because the tunnel is blockaded again. I just hope it’s sorted out before we set off. Pauline is having an investigative endoscopy this week. We’ve also go a tenth viewing of our property and a family barbecue later in the week.

The upside of the collapsed Greek economy is its effect on the illegal immigrant problem in Patras Port. So few lorries can afford to make the crossing that they are averaging a woeful 50 per day over three ferries. There is such reduced opportunity to sneak on to a truck and get to Italy that the migrants have all but vanished. The downside is that Syriza is badly split about the agreement Tsipras was forced to sign. Now he is busily trying to wriggle out of selling off ADMIE, the National Electricity Company to appease his far, far left wingers.

Good luck with that!