As a student of politics, I am currently in my element. Britain is entering General Election phase. Political discussion and debate is everywhere. This looks like being one of the most unusual of my lifetime. Almost certainly, neither of the two, main parties will command a majority. We will have another Coalition Government based around Tory-Unionist-UKIP or Labour-Greens-SNP. Personally, I think the latter is the most likely but it is touch and go. I don’t think the Coalition will be the tight affair we have had this time but a looser, ‘Confidence & Supply’ arrangement which will almost certainly see a second election within a couple of years. Actually, it could be a good election to lose.

As we’ve all retired from teaching now, my generation of students/teachers is appearing on social media sites increasingly as they reaffirm or reconnect with their pasts. I found this group which included , Kevin, Chris and ‘Tash’/John on Facebook. 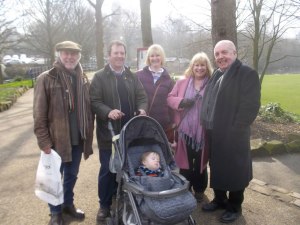 This is as much an observation on myself as it is on them but we all look as if we’ve been through the mill and, if you’ve been in education for forty years, you certainly have. The upside is that forty years of teaching will mean you have a good and secure, inflation-proofed pension. Most of my contemporaries, like Pauline & I, have two such pensions coming in and soon to be supplemented by State Pensions too which explains why we are able to trot the globe in search of those experiences we didn’t have time for while working.

Pauline’s sister, Phyllis and her husband, Colin, celebrate their 58th Wedding Anniversary today – or they would if they could remember it. 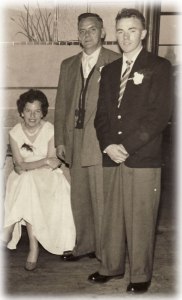 Actually, I had it recorded in my on-line diary and alerted Pauline who phoned and alerted them. Two years to their Diamond. Amazing! Pauline & I are in our 37th year of marriage which feels quite an achievement in itself. We will each be 87 if we reach our Diamond Anniversary.

Inflation has fallen to 0.0% in Britain – the lowest since comparative records began in the 1980s. Oil prices, clothes and furniture prices allied to aggressive food price cutting in supermarkets have brought this about but it will soon be reversed when the year on year oil price drops out of the equation. However, there is a substantive debate about the return to our inflation target of 2%. That will be for the next Coalition Government.

Meanwhile, the investment veteran, George Soros, has said that Greece’s attempts to escape its financial woes are now a lose-lose game, and has estimated the chances of the country leaving the eurozone at about even…. Greece is going down the drain. As Greeks prepare for Independence Day tomorrow, the Germans are demonstrating that they have rarely had less independence than at the moment. Greece will run out of money for salaries and pensions by the end of April unless they do as the Germans wish. That really isn’t ‘freedom’.

Went to M&S a few days ago for Pauline to collect an order. While queuing, we saw a travel case that we both liked. It was £100.00. We wanted two really and, with only one available, didn’t buy it. Today, we returned to pick up another of Pauline’s orders when we noticed the single case remained and the price had been cut by 50%. At £49.99, we bought it quite happily. Thank goodness we didn’t last week.

Independence Day. We certainly feel independent this year. It’s been a lovely, warm day for having the doors and windows open and letting the Spring sunshine in. We did a hard session at the Health Club and then came home to a lovely meal prepared by Pauline – Roast Saddle of Rabbit with braised Fennel, onion and garlic mushrooms. It was absolutely delicious.

We’ve got a series of trips coming up to Ashford Hospital on the Surrey/Middlesex border. It’s not a particularly pleasant drive and could involve the M25. We are choosing to avoid it because that section has had huge holdups on the two occasions that we’ve gone there. We now drive through Egham and Staines which is much more leafy and interesting and passes the wonderful Royal Holloway building.

A fascinating day in British politics – the end of the parliament was marked by a grubby, little attempt by the Tories to prepare the ground for getting rid of their hate-figure, Speaker John Bercow. 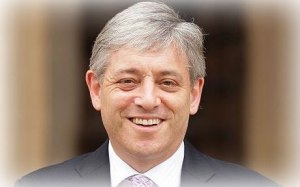 Led by Cameron & Hague and poorly supported by Gove, they failed because weaker but more principled people than them supported the rout of their underhand and unpleasant attempt. It was a fitting way to see them off to the General Election which I still think has every chance of a Labour Government conclusion.

Up at 5.30 am and out of the house by 6.30 am on our way to Ashford Hospital. Pauline is being admitted for major surgery and, although we both know it’s for the best and everyone reassures us that she can be confident of the result, we are both rather jittery. Rush hour traffic en route is horrible and we arrive with only about fifteen minutes to spare for our deadline of 7.30 am. I give her a kiss and have to leave her with her bag of clothes at Reception as I drive home alone.

As I do, it strikes me how uncomfortable it is to be driving alone. I so rarely do it these days. Normal mode is me driving and Pauline arguing with the sat.nav. almost before we’ve driven out of the garage. With no one to argue with that digital voice, I obey it and arrive home to an empty house. Pauline and I are aware of this weakness. We are never apart. We worked together for forty years and now we live, retired, together. Being aware of the problem doesn’t make it any easier to deal with when we are apart.

When I did the drive back to the hospital in the evening, I found her looking pale, drawn and tiny in a huge bed with lots of nurses. The operation had gone well but knocked the stuffing out of her.

Yesterday was warm and sunny with blue skies. Today is quite chilly and grey with a little rain. I have spent my day reading Greek and British papers.

In Britain, I thought Ed Milliband got the best of the debate with Cameron but the immediate, post-match spin following placed Cameron ahead. Interestingly, the first big poll taken since the debate and to be published tomorrow morning puts Labour 4% ahead and a clear vote for the sincerity of the Labour Leader over the Tory. People are immediately shown why Cameron has been desperately trying to avoid this confrontation.