How do you feel about beetroot? I must say from the outset that I have always loved it. I enjoy it in pickled, salad form and roasted as a vegetable but the one thing I have never done is drink it. In fact, I have spent my life avoiding vegetables in juice form just as I don’t wear sandals or hair shirts. We have always grown beetroot in our vegetable gardens over the past forty years without knowing its health-giving properties  but today I drank it for the first time on the strength of reliable evidence that says it increases anti-coagulation – which might help me reduce my intake of warfarin – and lowers blood pressure which might reduce other drugs I take. The juice sold by Tesco & Sainsbury is featured below. 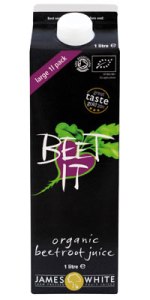 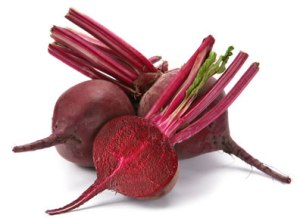 I drank a glass this morning and loved it. Pauline is rapidly searching out Juicers powerful enough to turn raw beetroot into a drinkable form but, as I sat down to a bowl of vegetable soup this afternoon after a large glass of freshly squeezed orange juice for breakfast and a mid-morning snack of a banana, I began to panic that I was in danger of voting Green. Help!

5.30 pm GMT – Syriza has won the Greek election with what may possibly be an overall majority.

Tsipras has done it and now inherits the poisoned chalice. Maybe that’s what Samaras wanted after all. Greece will shake with excitement, (misplaced) optimism and real trepidation. Nobody knows what will happen in reality but one thing is sure, it won’t be kind to right wing business people.

Today, the Greek people wrote history, Tsipras declared in his victory speech. The Greece of the elite has been defeated.

By elite, of course, he means ‘old order’ dominated by ΠΑΣΟΚ and Νέα Δημοκρατία but also and more basically, Capitalism and the money owning classes, inherited money and privilege. The ever optimistic crowds believe their vote has sent one, simple message: Good Night, Mrs Merkel.

If only it were that simple. A famously euro sceptic French politician has said that Syriza has made a mistake to believe that you can separate austerity from staying in the euro. On the contrary, austerity has been imposed precisely to save the euro. The two are inseparable… Anyone who thinks it’s possible to reform the euro is deceiving themselves and wasting time.

The immediate question is what do about the final, €3.6 billion of aid to Greece that was due to be signed off in the next month in return for Greek compliance with the demands of the Troika – demands that Tsipras said firmly in his victory speech last night would no longer be met. A two-month extension from Greece’s creditors, granted to conclude an audit that will determine the release of the next tranche of loans, is due to expire on February 28. A flight of capital out of Greek banks that began several weeks ago is likely to accelerate and the value of the euro against currencies such as sterling and the dollar will slide. With Greek government bonds suddenly perceived as more risky, the yield, or return, given to their holders is expected to soar. For many, simple, island Greeks this will be meaningless but will hit home when pensions and services are cut and EU subsidies dry up completely. Now is not a time to be ill, old or jobless in Greece. Equally, now may be a very risky time to hold Greek bank accounts.

Busy day today including a hard, gym session so I’m writing this in retrospect which is never good for a man with a memory like a sieve. Really big event today was Pauline cutting my hair which shows how dramatic life is at the moment. The latest Eurotunnel special offer was emailed to me – a £20.00/€26.75 day return for car and up to nine passengers.

We will do our monthly shop at the beginning of February in the Hypermarkets of Calais/Coquelles and, partly thanks to the Greeks, the purchases will cost us so much less than in the Summer.

Really pleasant, sunny day which reached 10C/50F in the afternoon. We went through what has become a regular ritual in our house now. We spent half an hour reviewing my clothes and throwing about two thirds of them out because they are way too big for me. Pauline has already replaced them with new and is tired of the old clogging up the wardrobes. It is quite a cathartic exercise which feels like discarding an old and unsatisfactory past to which I know I will never return. The problem is that I’ve become quite obsessive about buying new socks but losing weight doesn’t seem to affect their effectiveness. For that reason, my sock draw just gets more and more full. Used socks are not really the sort of thing one takes to the Hospice Shop so they stay in the draw.

Having established superfast broadband last week, I’m turning my attention to ‘cloud’ computer storage this week. We both use Ms. OneDrive cloud backup services currently but would like the increased security of hosting our own data so I’ve decided to buy a wireless, backup drive for home. This has an app. for connectivity with mobile phone , iPad and laptop whilst out of the house so it will seamlessly replace our current arrangements. 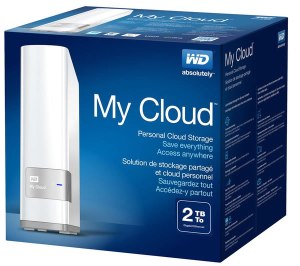 January is nearly done already. Has anyone found the ‘pause’ button yet? We really need it now. Life is so good that ‘pause’ would be perfect at this time.

Oh well, onward and upward – well outward to Currys to purchase my ‘Cloud Drive’ and to the doctor to collect a repeat prescription. The morning has been spent connecting up the drive, linking phones, laptops, iPads and Desktops to it. While we are out at the Health Club, 7Gb of data will be backed up wirelessly.

Very chilly day to day where the temperature didn’t rise above 6C/43F. We did a shop at Tesco this morning, dropped in to see Phyllis & Colin on the way home and intended to go to the gym. After four hard consecutive days of exercise, I decided that I needed a day off so we went out to M&S to buy a birthday present for James. As we got to the counter to pay, a older lady nipped in front of us. She was very trendily dressed in leggings and a particularly colourful, patchwork style, short coat. Pauline said immediately that she loved the coat. The older lady turned and smiled and said, Oh, I’ve had it for years. I’m 92 you know. We were left absolutely amazed as she skipped off towards the escalator. That’s certainly something to aspire to.

One thing that has particularly helped me to control my eating has been my new bean-to-cup coffee maker. I’ve had it exactly a year now. I drink three or four cappuccinos each day without sugar and with fat free milk. Today I found some interesting cups to serve it in. I’ve been looking, unsuccessfully for quite some time. These may be the answer: 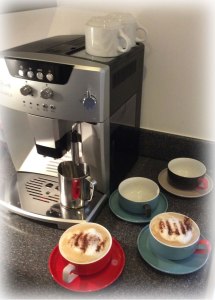 Woke at 7.00 am to a heavy frost/light dusting of snow but it had disappeared by 10.00 am as we went out to fix an iPad problem for Phyllis. Actually, it was something I had not come across before where her internet browser had gone into negative colour which made it even more difficult for her to read it. After a long period of trawling nerd chatrooms, I discovered that she had accidently touched the ‘Private Browsing’ button which, if selected, results in that effect. When you know, it is remedied at the touch of a button.

Unwittingly, Pauline and I are fitting in with the current demographic in relation to shopping. Forty years ago we used to do one, huge, monthly shop at a supermarket – Asda – and then smaller, supplementary ones at local, village shops. Twenty years ago, we went to one supermarket – Sainsbury’s to do a weekly shop and that was enough. Working long hours made us time-poor so the least time spent in the process was best. Now, in retirement, we shop at Sainsbury’s, Tesco, Waitrose and Asda according to what we need at what is good value. We play the system. The last two shops have been in Sainsbury’s and Asda so, today, came an envelope of coupons to the value of £25.00/€33.37 off our next shop at Tesco. In addition, we have 20p/€0.27 per litre off petrol which is already currently £1.06/€1.41 per litre. In a couple of weeks, a similar enticement will come from Sainsbury’s and we’ll go back there for a shop. All the supermarkets are desperately seeking increased customer base and loyalty but the British people are responding by becoming ‘discount tarts’. And so are we.