This is the final week of the sixth year of the Blog. As a result, I am reviewing everything that has happened in that time and preparing to make resolutions for the next six years which will take us to the brink of 70 years young. Today, has opened with a heavy frost and strong sun. A totally still day. Those leaves still on the trees are static. In fact, this Autumn has been notable for its lack of seasonal winds which usually help to denude the trees and herald winter.

Resolution No.1: Must get back in to Opera. I used to spend all my leisure time listening to it when I was working but, now, with all the time in the world, I’ve left it on the shelf. Pauline’s favourite is Bizet’s The Pearl Fishers. I prefer Puccini anything. Living in an apartment doesn’t help but we’ll have to go to the opera. I’m going to start looking for it. The E.N.O. have Verdi’s La Traviata on in February. That would be a start. 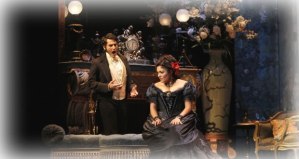 The beautiful days just keep coming. Sharp temperature under blue sky and strong sun this morning. The sun is so strong, even next door’s cat is squinting. Pauline is busy curing salmon in preparation for Christmas while I’m reading and writing.

The Bank Deposit Protection Scheme guarantees finances only up to £85,000.00 per person. Although it is not a major amount or really likely to crash about our ears, as soon as the interest takes us over the limit, I transfer it to another account. I was just musing on the changes that have taken place with this in such a short time. In the past, one would have gone to a bank in the High Street, filled out multiple forms, gone home and waited for a week or so before a letter arrived informing one of the completion of the process. Now, in a couple of clicks, the procedure is completed and seen to be completed on screen. There is still the scary thing of losing thousands – in our Greek sale terms hundreds of thousands – by entering a wrong digit for the receiving account but it is wonderfully easy.

Resolution No.2: Must get on with reading around the subject – The History of Political Ideas. It formed the basis of my Masters Degree some thirty years ago and I was about to return to it this Summer when events took over. I was looking forward to discussing it with that arch Machiavellian and intellectual – The Poison Dwarf – but other things intervened.

Because it is the most wonderful morning of bright blue skies and strong, low sun, we have decided to drive down to Sussex to view a house. The builder has not yet finished but it will be available from early Spring 2015. We drive down the M23 and A23 through Pease Pottage and Handcross to Sayers Common and Hurstpierpoint.

The location was lovely with facilities close by in Brighton (south) and Burgess Hill (east). The house was well built but the rooms were just too small. We weren’t deflated at all. At lest we had found an area that really appealed and where we will continue to look.

Resolution No.3: Must find a new house and sell this Duplex within the next, twelve months.

We have taken our property off the market over Christmas and will re-launch it with a new agent in the Spring. We can’t face inviting viewings which may be extremely speculative over the Christmas Holidays. We contacted the Estate Agent requesting the return of our house keys and received this considered reply.

I hope your well. We have drop the keys back to the house at 12.20 today.
Have a wounderfully christmas

I, for one, expect to have a really wounderfully christmas! What are English teachers doing these days?

Resolution No.4: Must proof read my Blog before pressing Publish whatever time of night it is.

Resolution 4 doesn’t come in to force until January 1st. Perhaps I’ll get the dates right by then. Picked up a free prescription from my wonderful doctor for 24 INR testing strips which would otherwise have cost me £85.00. Did a supermarket shop. Around 9.30 am, Tesco was pleasingly quiet so close to Christmas. Filled up with petrol at £1.13 / €1.44 per litre, had the car cleaned for £10.00. Called in to see Phyllis and Colin and then returned home in time to thank the gardeners for their excellent work on the grounds over the past twelve months.

Pauline took at least three phone calls from Developers who are getting increasingly desperate at this time of year. I had a long phone call from Dave Beasley in North Wales. He is an old friend from my home village, Repton in Derbyshire. I haven’t seen him in the flesh since 1972. That reminds me of

Resolution No. 5: Must reacquaint myself with long lost friends in 2015.

When one is given the time to reflect on one’s existence (and if you think that sounds pompous, maybe it is) one can oscillate between two diametrically opposed states. One of my ex-colleagues reported recently her little daughter asking, Mummy, are we in a story or are we real? It is far more profound a question than it first appears. On the one hand, we have that old aphorism about life not being a rehearsal. On the other we have the Live for the Moment philosophy – Carpe Diem. I have a real problem with doing things for their own sake as opposed to doing them to get to somewhere else in the future.

I am constantly asking myself what I will achieve or gain by doing something. How am I growing, developing, gaining by doing something? While enjoying a beautiful sunset or a wonderful opera, I am asking myself whether I am deriving personal profit or human capital from the experience. When I was younger, I justified ephemeral experiences by a belief in the cultural capital I was accruing and the belief that it would inform and deepen future events in my life. In the final third of my life, I find that increasingly spurious but I still have to tell myself that so many of these experiences are my only chance.

Lovely day. We drove over to Godalming – only about 12 miles away – to meet Jill Storey née Fisher. She was Pauline’s best friend 35 years ago and taught in the same school back in Lancashire. Jill moved south and so have we. We met at her brother’s house in Godalming. He is a Patents Lawyer and his wife is a City Banker. It is a huge old house which was previously owned by Rick Parfitt of  Status Quo. It has a tennis court and a Gertrude Jekyll garden. The reunion was absolutely delightful.

Must do Resolution 5. It’s great!

Tomorrow will start Week 313 of the Blog or Year 7. The final resolution of this year is:

Resolution No. 7: Complete Year 7 of the Blog culminating in Week 364.