A sharp frost and a bright start to the day gave way to grey darkness and light rain. We understand that it will be a wet week.

Pauline and I have spent the day discussing our plans for 2014. You may think this is a few days late but we have both been thinking it through and are now ready to negotiate and agree the way forward. Of course some aims are contingent on the achievement of others but the direction of travel is clear. Health and wealth figure highly in our continuing journey to joint happiness. I have set myself a weight target for this time next year and it will be near to my wedding weight. The one problem neither of us can see our way past at the moment is that identified with my heart and subsequent drug intake but we will try not to let that unduly cramp our style.

Another day that started cold and bright but soon went pitch black, with thunder and lightning followed by torrential rain. The gutters here have proved to be inadequate for heavy rain and will all have to be upgraded. The last attempt was not good enough because the joints leak. 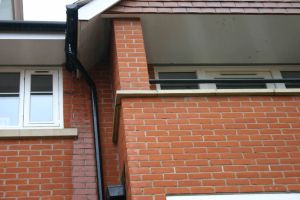 Gloriously sunny day. A little cool but strong sun in blue skies is a tonic.

I swore I would never do it but I found an ‘App.’ on my iPad, tried it out and got hooked. I’m rather ashamed. Pauline is amused because she advised it many times over the years but I rejected her advice. I’m counting CALORIES! It started because all the gym equipment tells me how many calories I’ve used after each exercise. I was then just browsing the iPad App Store when I came across the MyFitnessPal app that records calories in and calories out in terms of meals broken down into their constituent parts with calorific values and exercise calories used on the other side of the balance. 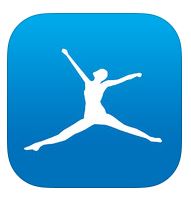 The record on the right is not mine but you will notice that their logo was modelled on me which particularly drew me to them. A male of my height and weight and generally sedentary nature is advised to limit calorie intake to 2170. In the past week and a half I have always managed with half of that allowance given that I use 350 – 400 calories in the gym.

Heavy rain over night has given way to another beautiful, mild day. After the warmest winter for twenty five years, wildlife not normally seen until spring has been tricked into making an early appearance by mild temperatures. Butterflies have been reported in Cambridgeshire and Pembrokeshire, ladybirds in Devon and Co Durham, and swallows in several places in Southern England.  There has been  a surge in sightings of birds nesting and shrubs coming into bud. There are reports also of snowdrops flowering in Kent, Suffolk and Anglesey, hazel flowering in Devon, Lincolnshire and Cheshire, and elder budburst in Hampshire, Essex and Somerset. 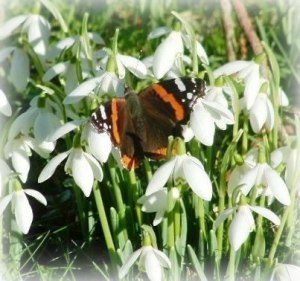 Apparently, the Met. Office has said that the average UK temperature last month was almost 2C above the average. The heavy rain seems to fall over night but the Surrey days are sunny and mild.

I (we) are worried about my heart rate and about my INR. At the same time, I am trying to lose weight. The food that would help me lose weight – green leaf things – counteracts the warfarin I take to control my INR. The exercise I need to supplement my diet in burning calories, raises my heart rate – sometimes dangerously. It has been decided that I must monitor my heart rate more closely and regularly, particularly when exercising. I am having to wear a heart monitor across my chest which communicates with my watch by Bluetooth to inform me of my fluctuating heart rate. 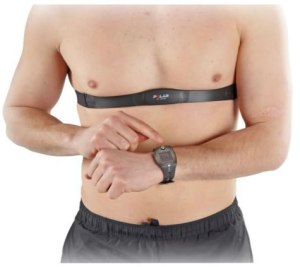 I understand that scientists are saying the Sun is in a phase of “solar lull” – meaning that it has fallen asleep – and it is baffling them. History suggests that periods of unusual “solar lull” coincide with bitterly cold winters.

The most extreme solar minimum on record was the Maunder Minimum. This lasted from 1645 to 1715 and corresponded to a minor Ice Age. What price Global Warming?

The day has started off grey and dull but the sun was out by ten and it has developed in to quite a pleasant day. We have been planning travel arrangements. Eurotunnel, once again, have advertised a £20.00 day return just in time for us to do some shopping. Probably Wednesday, February 19th. We have also booked the Holiday Inn in Brighouse, just outside Huddersfield for three nights in March to visit friends. We were members of the Health Club there for a number of years.

Next we are going to arrange some more trips to the South Coast for house hunting. Pauline has gone out to a Zumba class at the Health Club. She’ll be shattered when she gets back.