62 year + 1 day. Already. And so life gallops on. Even so, a beautiful day. Bright sun and blue sky. I’m afraid we didn’t make the most of it. I read The Sunday Times on my iPad and did some Office work. Pauline cooked a wonderful meal of roast lamb and mixed vegetables with garlic mint sauce. I was still full from my Birthday Dinner which was carbohydrate: Linguini, white crab meat and brown shrimps with garlic. It was like heaven but it sat in my stomach like a guilty secret for hours.

The media is dominated by the Welfare State but it is still a crude, Tory led story. If you get too much Child Benefit, it turns you into a mass murderer. It really is taking the Left too long to develop a narrative that will speak to Middle England. It really shouldn’t be that difficult.

Another beautiful day with sun and blue sky but a bit of a chill first thing. Out early to take Pauline to the Doctor. Nothing serious. Mandy phoned to ask if we wanted to go and watch Daniel, her son, play tennis in Guildford but we have a busy day today. In fact, we have a fairly busy week.

I still haven’t received my documents from Derbyshire Records Office so I must phone them today. This afternoon, I have to take my wife back to………..you’ve guessed it……… Marks & Spencers. What a world of sophistication and dazzle we lead.

Thatcher’s gone. I won’t mourn her. Neither should any person who pays an inflated energy bill from a privatised company which is making huge profits nor someone crammed on to a privatised train after paying an exorbitant fare to a company banking all their cash. Why are there so few council houses for the Homeless? Thatcher! Why does Britain have so little manufacturing industry? Thatcher! Why does Britain have such an arrogant, unregulated Financial Sector? Thatcher! She quite deliberately set out to destroy whole communities as she increasingly saw herself as ‘royal’. I will never forget her rushing out to the cameras and announcing, One has become Grandmother. Well, one has now become a corpse. Bye.

On a deeper and more philosophical level, I bought myself some new socks. I’m really going for broke now.

Now I know that my Great, Great, Great, Great, Grandmother, Jane Sanders (1799 – 1856) made woollen hosiery in the cottage industry of the Midlands, I am much more interested in and adventurous about my socks. These were made in The United Arab Emirates and we can probably thank Thatcher for that as well.

A grey day today unbefitting the mood of National Celebration and Rejoicing.

News from Greece is becoming predictable. As waves of anti-Germanisation spread across austerity-torn southern European countries, as Portugal’s courts brand many German-led austerity measures illegal, Greece cranks up the rhetoric with a (published) top-secret report compiled at the behest of the Finance Ministry in Athens that has come to the conclusion that Germany owes Greece billions in World War II reparations. The total could be enough to solve the country’s debt problems. It is said, however, that the Greek government is wary of picking a fight with its paymaster.

Although still chilly, warmer weather is on the way. The bushes and trees in the garden around us are bursting their buds energetically. The flowering cherry right outside our apartment is just starting to flower – pink blush moving to crimson. 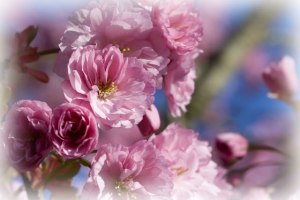 We have a very busy day out tomorrow so we are trying to get home jobs done today. I phoned Derbyshire Records Office for the third time in a month to enquire about my research request. They assured me it was sent to the LA’s postal service for second class post on March 27th. It is rather slow, they said. It still hasn’t arrived after almost two weeks and I am starting to get a little irritated. Calm Down Dear!

A very busy day. We were at the Walk-in Hospital for my INR at 7.00 am this morning. First test for six weeks. Home for coffee. We have an appointment at Santander to purchase 2013/14 ISAs. They phoned yesterday to confirm our meeting and to ask if we would like to switch to their  Current Account. I thought it was just a courtesy call but, this morning, I checked the Santander site to find that they had pulled their 2.8% ISA offer (fixed for 2 yrs.) unless one switches Current Accounts to them. Now I realise why they phoned.

After coffee, we drive into town. Pauline goes to have her haircut at Headmasters while I visit Santander to cancel our meeting. They weren’t surprised although the still tried to sell me their Current Account deal. I went on to Halifax and we bought their 3 yr fix at 3%. The maximum this year is £5760.00 per person which is what we did. We feel quite pleased with our self discipline. We each now have five full cash ISAs although the rate is gradually coming down. Two each with a year to run at 4%. Two each with a year to run at 3.7% and now one each with three years to run at 3%. Given that it looks like interest rates are going to remain low for the rest of this parliament, that seems quite a pleasing result.

Pauline checks everything. Every time we leave a house, she is scanning for slipped tiles, broken down pipes, flaking paint. As we approach or leave the car, she is scanning it, checking for damamage and defects. She can be a nightmare. It can get me down. I am intrinsically an optimistic person who looks for the best. I suppose that is why she balances me out perfectly. She is a Libran and I am an Aries. Astrologists say we complement each other perfectly. (What am I talking about?) Today, as we walked back to the car in the multi-storey car park, Pauline, scanning as she approaches the car, spots a nail in the tyre. When we bend down to look closer, it becomes obvious that some kind person had taken it upon themselves to attempt to push a large, thick screw in to the tread of our virtually new tyre at an angle that meant it would totally destroy our tyre in the first revolution of the wheel as we reversed out of our space. I pulled the screw out. The tyre didn’t deflate but we drove the half mile to KwikFit to have it checked. Fortunately, there was no serious damage.

Heard from Derbyshire Records Office this morning but, after all this time waiting, the information was disappointing. The girl doing the research reports consulting the Hospital Indexes for our Grandmother, Mabel, and finding the relevant references only to look them up and discover the pages missing. The research cost me £21.00 – not a lot, I know, but all I got was confirmation that she was there and the dates. I also got a couple of tentatively interesting snippets. It looks as if she was referred to with a Reception Order in March 25th, 1930 and then again with a Reception Order in October 15th, 1932. It is not clear but it looks like she had an intial admission and then a Final Admission. What happened in between, is not clear. It confirms she died there on January 2nd, 1962.

Lovely warm morning. One can smell the Summer coming. Going out for a walk in the local area today and, this evening, going over to see Mandy and the boys.

I am having terrible trouble with my Hub. Its operation is so intermittent, particularly with wireless, that it is going to have to be repaired or replaced. I’m told it might take a week so please bear with me. I will record my Blog off-line and upload it as soon as I can. See you on the other side.